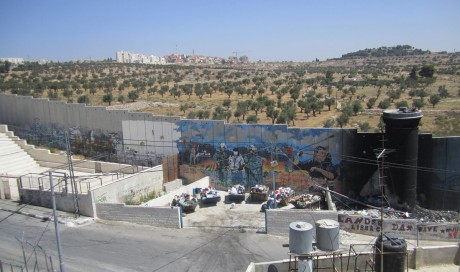 While being here we’ve heard so many stories of oppression and repression of Palestinians by Israeli Jews (about 25% of Israelis in pre-67 borders are Palestinians, who are “citizens” of Israel, but regularly denied equal services and opportunities, thus it is important to distinguish between Israelis and Israeli Jews) there are also many signs of ongoing resistance. Large-scale movements (outside of the BDS movement) seem to not be ascendent, yet small struggles happen everyday.

We have passed multiple security towers on the Apartheid Wall which have been torched, including the one above in the Aida refugee camp. Aida youth have figured out how to light fires against the wall to soften in, and then hack at it with tools, eventually breaking the first hole in the wall. In Lyd there is a much smaller wall was recently built separating the Palestinian neighborhood of the Station from a wealthy Israeli enclave. One night an anonymous bulldozer crashed through the wall, leaving a chunk of it open for crossing. 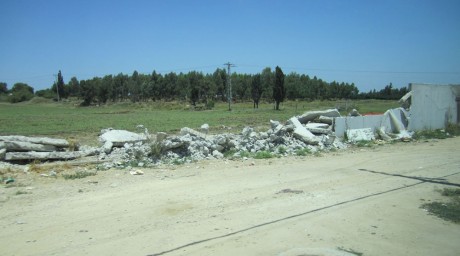