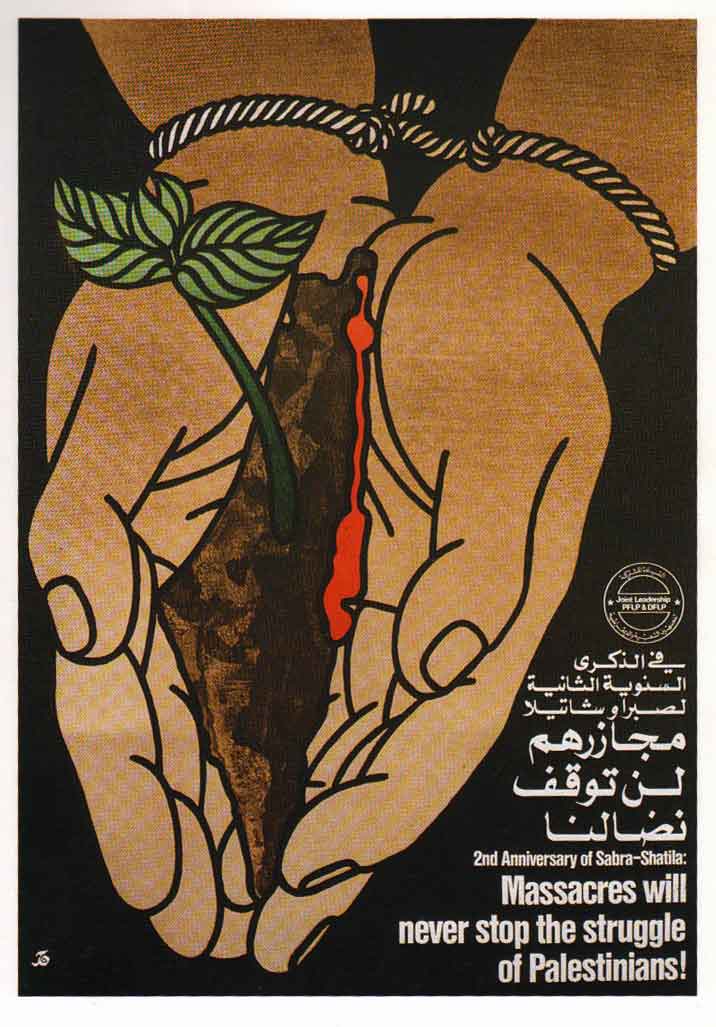 As a result of the daily massacres that happen in Gaza, I decided to share some of Marc Rudin’s poster work during my shift at the archive today. We have an exhibition catalog of poster designs he made while cooperating with the PFLP (Popular Front for the Liberation of Palestine) from 1979 through 1991.
The following image, nearly 20 years old, is again relevant.

Josh Macphee had this to say about him on the Justseeds blog awhile back:


Marc Rudin (who later took on the name Jihad Mansour) is a Swiss-born artist, musician and activist who became involved with the Popular Front for the Liberation of Palestine (PFLP) in the late 1960s. In the 1970s he was involved in the militant and armed left in Europe, including working with groups robbing banks in order to help fund the PFLP. In 1980, he move to Palestinian refugee camps in Lebanon and Syria and became one of their primary poster producers, creating over 200 posters/graphics in the 1980s. This is a rare exhibition catalog of his work, including posters, drawings and block prints, all of which are quite accomplished and impressive. The introductory text is in German only, but the information about each image is in German, English, French and Arabic. Most of Rudin’s posters are multi-lingual to begin with, which allowed them (and the PFLP) to reach into Europe and beyond Arab-only speaking audiences.

I also just realized that it was recently the anniversary of the assassination of the Palestinian cartoonist, and creator of Handala, Naji Al Ali. So I share the following in his memory.

Next Post: “It was a home grown kind of insurgency:” Nancy Peckenham on Guatemala >