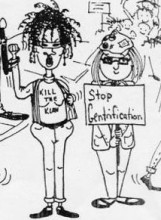 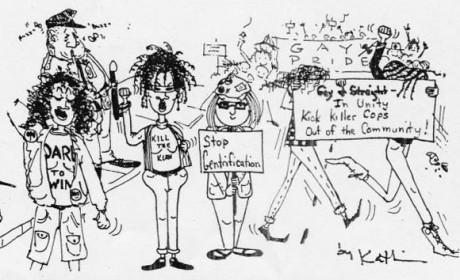 This panel brings together organizers, residents and academics to discuss the intersections between policing and housing policy. Topics include policing in public housing, in rapidly gentrifying neighborhoods, and of people experiencing marginal housing.

Introduction by: Christina Hanhardt, author of Safe Space: Gay Neighborhood History and the Politics of Violence

Equality for Flatbush (E4F) is a new people of color-led, multi-national grassroots organization which does anti-police repression, affordable housing and anti-gentrification organizing in the Flatbush and East Flatbush communities of Brooklyn, NY

GOLES (Good Old Lower East Side) is a neighborhood housing and preservation organization that has served the Lower East Side of Manhattan since 1977. We’re dedicated to tenants’ rights, homelessness prevention, economic development, and community revitalization.

Picture the Homeless is a grassroots organization, founded and led by homeless people. We are organizing for social justice around issues like housing, police violence, and the shelter-industrial complex.

Joan Gibbs is the General Counsel for the Center for Law and Social Justice as well as the Project Director of the MEC Immigration Center. Prior to joining the staff of CLSJ, Ms. Gibbs was a staff attorney at the Center for Constitutional Rights, the ACLU Women’s Rights Project and the Marvin Karpatkin Fellow in the American Civil Liberties in the national office of the ACLU.

Christina B. Hanhardt is an Associate Professor in the Department of American Studies. Her research focuses on the historical and contemporary study of U.S. social movements and cities since the mid-20th century, with an emphasis on the politics of stigma, punishment, and uneven development.

This panel is organized as part of the We Won’t Move exhibition at Interference Archive.