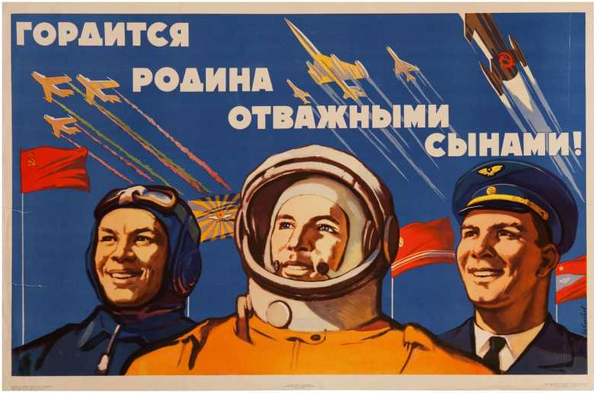 Exhibit: The Poster in the Clash of Ideologies traces propaganda at DOX

Published: 16 February 2014 Written by Raymond Johnston
World War I began the use of the poster as an ideological tool
The year 2014 isn’t only the 100th anniversary of the start of World War I, but also the start of using posters on a mass scale to promote ideology. That century also covers a lot of ground, from hot and cold wars up to the Sept. 11 attacks and the Occupy movement. For the show called the Poster in the Clash of Ideologies 1914–2014, DOX Center of Contemporary Art has broken the century down into 10 themes and gathered together a vast array of posters to show how ideas were promoted. Some are the works of noted artists, while others are anonymous. All of them, though, played a roll in the struggle to win the hearts and minds of the population.
“World War I brought a new idea for posters,” DOX’s artistic director Jaroslav Anděl told the Prague Post. Many museums will take the anniversary as an opportunity to look just at World War I, Anděl said, but DOX is taking it as a chance to look at the legacy of how it changed the way ideologies were promoted.
The Poster in the Clash of Ideologies 1914–2014
When: To May 19; Open Wed.–Mon (closed Tuesdays)
Where: DOX Center of Contemporary Art www.dox.cz
Prior to the war, posters were mainly used to sell products, but during and after they served to sell concepts as well. “Tools developed in advertising served this purpose: they demonized the enemy, agitated for support for the war effort by buying government bonds, for saving food and other material resources, for support for soldiers and their families, or for enlistment,” Anděl said.
So many things occurred in the century, that it was hard to show them all. “Many events that shaped modern history are represented by one, two or three posters,” he added. Obtaining a fairly global cross section was a bit difficult. “Local collections tend to have local posters,” Anděl said. For recent events such as Occupy Wall Street, the museum turned to a New York-based group called Interference Archive, a volunteer group that documents social movements. Another large source was the Ne boltai! Collection, which archives propaganda from the Soviet Union and its satellite states.
It often did not matter what ideas were being promoted, the methods were the same. “A comparison of Nazi and Stalinist propaganda shows that despite their ideological differences, both totalitarian regimes utilized similar elements and procedures in their propaganda. These similarities stemmed from the general characteristics of totalitarianism such as the cult of the leader, the subordination of the state to party dictatorship, dehumanization of the enemy, and police terror,” Anděl said.
Many of the posters, especially images of Adolf Hitler, Josef Stalin and Fidel Castro, may be familiar. Others are a bit more obscure but help to trace the shift from promoting the need for rationing and support of the troops to the more general ideological messages of the Cold War and then popular protests against globalization.
The posters relating to 9/11 and its aftermath are perhaps the most provocative part of the exhibit, as some artists took it as an opportunity to be critical of US policy. Yossi Lemel’s poster “Explosive ideas,” for example, shows two pencils positioned like the Twin Towers, with the top of one of the pencils in flames.
Some ideas come full circle with the famous “I Want You” poster from World War I being refigured by TomPaine.com into a poster saying “I Want You to Invade Iraq,” with Osama bin Laden in place of Uncle Sam.
A few posters by street artist Shepard Fairey, famous for his Obama “Hope” poster among others, also address modern events. His “Obey” and “Make Art Not War” posters are among those exhibited.
Many other artists have already copied the style and even his Obama image in several posters. “Yes We Scan” shows a red, white and blue Obama listening on headphones. It is one of several to look at the scandal of the US government agency NSA monitoring both citizens and foreigners. Another poster uses Fairey’s Obama image but says “Killing Hope” and urges the US to keep its hands off Syria.
This article was originally published at http://www.praguepost.com/night-‐day/37254-‐exhibit-‐the-‐poster-‐in-‐the-‐clash-‐of-‐ideologies-‐traces-‐ propaganda-‐at-‐dox