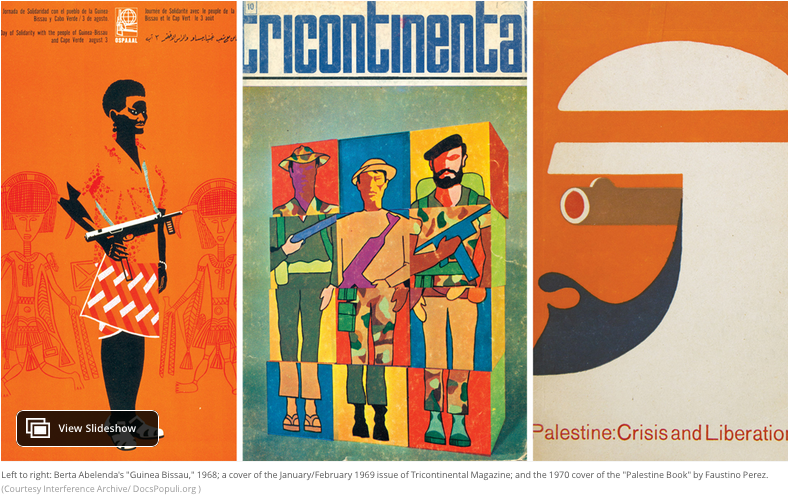 The Parasitic Poster: Making Sense of Cuban Propaganda in Brooklyn
BY MOSTAFA HEDDAYA | NOVEMBER 05, 2015
“Aesthetically,” Susan Sontag wrote in 1970, “the poster has always been parasitic on the respectable arts of painting, sculpture, even architecture.” But what of those efforts that are parasitic on the poster? Interference Archive, a not-for-profit art space in the Gowanus section of Brooklyn, has organized an exhibition of posters created by the Cuban internationalist propaganda group Organization of Solidarity with the People of Asia, Africa, and Latin America (OSPAAAL). The show, “Armed by Design” (through November 29), is oriented around a collection of posters and other printed matter produced by OSPAAAL, which was founded in 1966 after the conclusion of the Tricontinental Conference, an internationalist gathering of political parties and national liberation movements from 35 countries hosted that year in Havana.
These posters are striking for their powerful use of graphic design, and have long been celebrated — Sontag’s above-quoted comments on the poster came in an introductory essay she penned for a book of OSPAAAL posters, “Art of Revolution: Ninety Six Posters from Cuba,” put together in 1970 by Dugald Stermer, art director of Ramparts, the journal for which she had previously written on Cuba in 1969. In that era of “radical chic,” the clean forms and aggressive colors accentuated the appeal of the posters’ solidarity messages, even, or perhaps especially, in the United States, whose global imperialism and crimes in Vietnam were OSPAAAL’s primary target. The quadrilingual posters, often bearing text in English, French, Spanish, and Arabic, are today held by major collections — including one example at the Museum of Modern Art — and an active trade for them exists globally, as several conversations in Havana earlier this year attested.
Curated by Lani Hanna, Jen Hoyer, Josh MacPhee, Vero Ordaz, and Joelle Rebeiz, “Armed by Design” is a compelling introduction for those unfamiliar with OSPAAAL, and a solid catalyst for activist activity. But despite a slim catalogue volume, a portfolio of commissions from leftist artists and collectives (including Ganzeer, an artist whom I’ve been critical of in the past), some public programs, and even mixtapes, the exhibition experience feels like it’s missing a sense of broader perspective. This may be an unfair point, because Interference Archive is an activist archive and exhibition space, not a museum or scholarly enterprise, but it would have been helpful to have a greater sense of the aesthetic and sociopolitical context and content of the work brought into the galleries — Sarah Seidman, Nate George, and Lani Hanna all contribute valuable texts to the catalogue on these issues, but such key material should not be a $15 supplement nor absent from the physical show itself.
There is a visually rich history to be told around the origins of internationalism, and how pre-revolutionary Cuban art developed in the first half of the 20th century, particularly the modernist Vanguardia movement of the 1920s, and how it ties into OSPAAAL’s aesthetics. There is also much to be said about individual artists, like Alfredo Rostgaard, who participated in OSPAAAL projects but also painted and displayed a clear affinity to Pop Art. These un- or under-explored threads would have made the exhibition feel less like an agit-prop showcase and more like, well, an exhibition.
Originally published at http://www.blouinartinfo.com/news/story/1269237/the-parasitic-poster-making-sense-of-cuban-propaganda-in