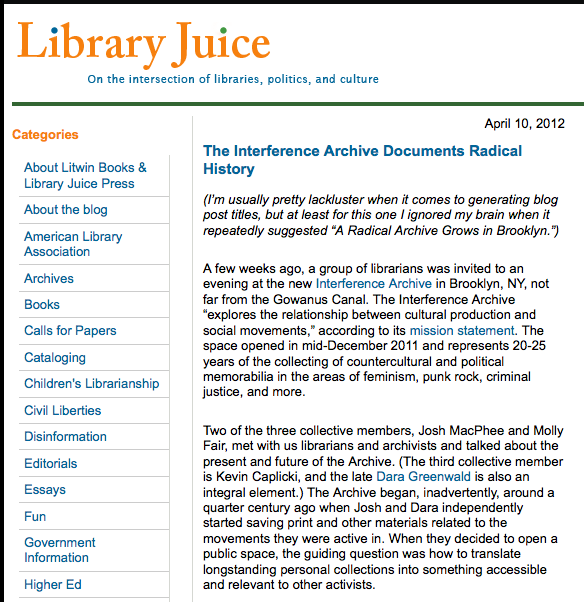 (I’m usually pretty lackluster when it comes to generating blog post titles, but at least for this one I ignored my brain when it repeatedly suggested “A Radical Archive Grows in Brooklyn.”)
A few weeks ago, a group of librarians was invited to an evening at the new Interference Archive in Brooklyn, NY, not far from the Gowanus Canal. The Interference Archive “explores the relationship between cultural production and social movements,” according to its mission statement. The space opened in mid-December 2011 and represents 20-25 years of the collecting of countercultural and political memorabilia in the areas of feminism, punk rock, criminal justice, and more.
Two of the three collective members, Josh MacPhee and Molly Fair, met with us librarians and archivists and talked about the present and future of the Archive. (The third collective member is Kevin Caplicki, and the late Dara Greenwald is also an integral element.) The Archive began, inadvertently, around a quarter century ago when Josh and Dara independently started saving print and other materials related to the movements they were active in. When they decided to open a public space, the guiding question was how to translate longstanding personal collections into something accessible and relevant to other activists.
Josh and Dara felt that the collection they had amassed should be controlled by the community and not risk falling through the cracks if it were given to an institution. It should be accessible — literally and emotionally — to activists, non-students, and others who may not feel comfortable trying to use a university archive. The Archive’s philosophy is to privilege use over preservation (and, in the process, to get the stuff out of the living room).
Just how much stuff are we talking about? Josh and Molly estimated that the Archive includes 3000-5000 books, roughly the same number of pamphlets, 20 drawers of posters and prints, and hundreds of newspapers, plus t-shirts, buttons, and other items that social movements produce. At a guesstimate, they said that 40% of the materials are from outside the U.S.
The shelving and drawers that hold the items are in the middle third of the space. At the front is an open area for displays. Right now, they have a Squatting Europe Kollective Library exhibit up, and they’re organizing future exhibitions, to change on a quarterly basis or so. There’s even a small public coworking space in the rear. The collective’s vision for the Archive, besides the obviously archival function, is for it to serve as a space to socialize and engage with history.
The Archive’s inspirations include Brooklyn’s own Lesbian Herstory Archives and the Freedom Archives in terms of their autonomy, commitment to community, and representations of living history. Another model is “Signs of Change,” an incredible, wide-ranging exhibit that Josh and Dara themselves organized at Manhattan’s Exit Art gallery in 2008.
One key difference between the Archive and more traditional institutions is that while materials may be well-preserved in a museum, the staff there doesn’t necessarily know what they have, and they cherry-pick the highest-profile artists. Josh talked about visiting the archives at the Museum of Modern Art, which displays the Keith Haring and Claus Oldenberg work but leaves the American Indian Movement posters and other items “not cool enough to catalog” (a real staff notation, Josh swore) in drawers. As Josh and Molly put it, they don’t follow the “hero” model.
During our visit, there was a lot of discussion about how to build an Interference Archive catalog. Molly is looking into Collective Access for the database. They want whatever platform they choose to be able to store data that’s meaningful to activists — such as whether a poster was printed in a movement print shop. An archivist from a labor library pointed out, to several heads nodding in agreement, that archivists these days know a lot about metadata and the technology of archival access, but they don’t necessarily know — or care — about finding the context of the material. Projects are grant-driven, and the people who get hired are the ones with the data skills.
At any rate, digitization is not the answer here — it doesn’t automatically lead to permanence anyway, and the Archive collective is very sensitive to the fact that the experience of viewing a PDF is simply not as rich as handling the actual poster. They also recognize that images shouldn’t just be available online, floating around without context. Otherwise, they’re just “empty signifiers,” as Josh said.
The subject of copyright came up. Josh and Molly framed the issue as the question of whether they’re in the service of the movement and its inheritors, or of the producers of the materials. Essentially, the collective is still working out how to deal with creators’ rights regarding reproduction of their images — complicated terrain, to be sure. They also noted that their and others’ research on the context of production will help keep people from claiming ownership of collectively-produced pieces, which has happened in the past.
So, what’s next for the Archive? A major policy question they’re grappling with now is what to do about intake. Josh and Molly talked about needing a collection development policy as well as a referral list for people who are offering items that ultimately don’t fit in the archive. They’re also figuring out how to shelve materials. In the absence of a database that can assign multiple descriptors to an item, where it’s physically located is a key determination for the time being. More conceptually, they need to confront their own bias. The collective members come from anti-authoritarian, horizontal traditions and tend to privilege materials in that vein, but they don’t want to be just an anarchist archive.
If you’re in the NYC area and are now totally amped to help out at the Interference Archive, here are some things you can be a part of: