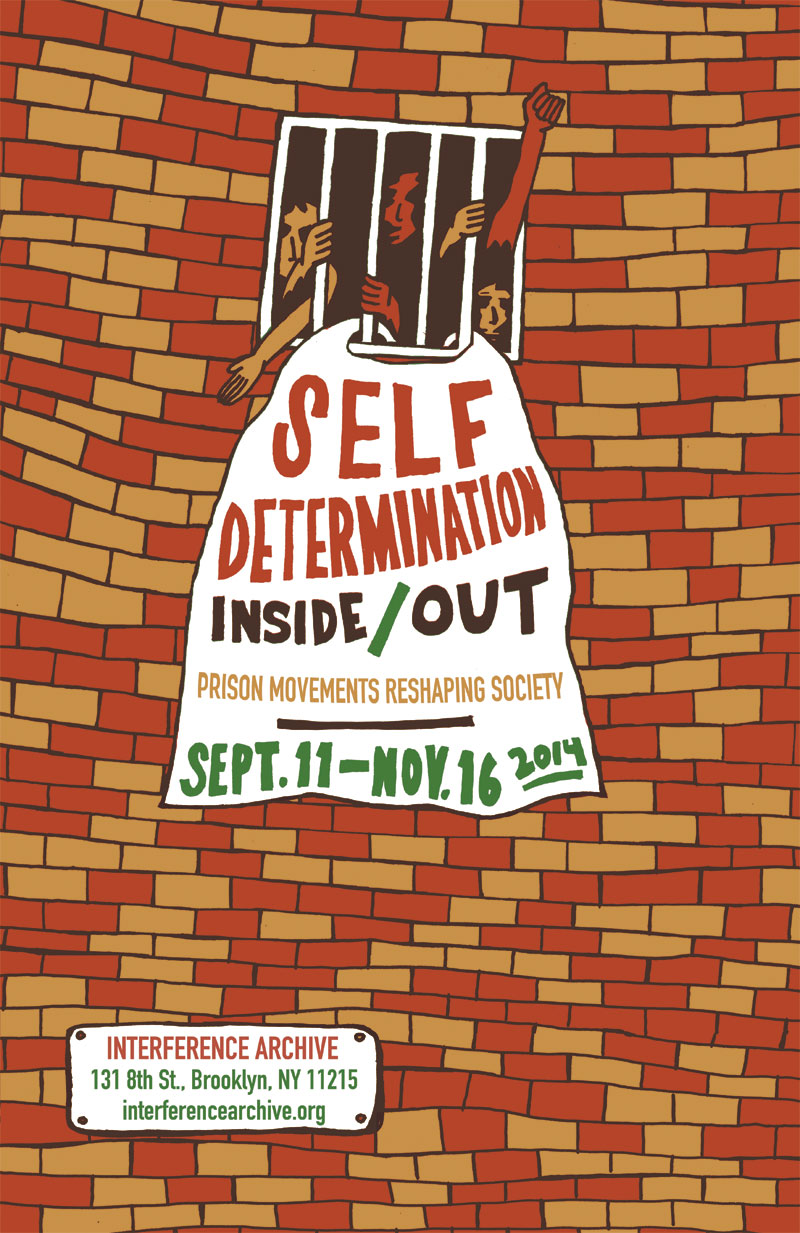 Penal System Exhibition
“Self-Determination Inside/Out,” [a] powerful exhibition by incarcerated individuals and their allies touching on incarcerated women, AIDS education, political prisoners, prisoners-as-laborers, the 1971 Attica Prison uprising and other topics, opened Sept. 11 in Brooklyn at 131 8th St. in the Gowanus section.
Film, video, posters, audio recordings and publications to look the history and expansion of America’s penal system and the struggle for reform are used to examine the history and expansion of America’s penal system and the struggle for reform in the exhibit, presented by Interference Archive and organized by Molly Fair, Josh MacPhee, Anika Paris, Laura Whitehorn, and Ryan Wong.
A growing schedule of public programs – running through Nov. 16 – are a part of the exhibition. Events will be held at Interference Archive unless otherwise indicated.
The exhibition events continue on Sept. 17 at 7 p.m. with a walkthrough tour of “Self-Determination Inside/Out” for curators, prison activists, and formerly incarcerated people.
“Shattering Captivity: Struggles of Incarcerated People Against Solitary Confinement, Control Units, and Communication Management Units,” a session including former inmates who experienced control units and solitary confinement, will be held Oct. 2, at 7 p.m.
The struggles of women and transgender persons will be the subject of a talk on Oct. 9 at the City University of New York Graduate Center, 365 Fifth Ave. (between 34th and 35th Sts.), at 7 p.m.
The film “Control, a documentary portrait of mass incarceration and its impact on households and communities, will be held Oct. 14, 7 p.m., followed by a discussion with the filmmakers and youth criminal justice advocates.
On Oct. 30, the session “The Pontiac Brothers and the Rise of New Organizing in Prison,” will be held at 7 p.m. Attorney Michael Deutsch, one of the lawyers for both the Pontiac Brothers and the Attica defendants, will discuss the role of the Pontiac and Stateville prison revolts organizing inside and outside prisons. His talk will include a slide show originally used as an organizing tool around the Pontiac Brothers in the late 1970s.
A screening of Blair Dorosh Walter’s “Out In The Night,” a documentary about the NJ4 case about young black lesbians who supporters say were unjustly imprisoned in New Jersey, will take place Nov. 15 at 5 p.m. Walter’s wlil attend the event.
Educational and class visits will be offered as part of the “Self-Determination Inside/Out” exhibit. Courses or organizing groups focused on criminal justice, U.S. history and politics, public health, policy, race, gender, and LGBT studies are particularly suited for visits.
This exhibition is sponsored by the Greater New York Arts Development Fund of the city’s Department of Cultural Affairs, administered by Brooklyn Arts Council. Funding for the exhibition also comes from the A.J. Muste Memorial Institute‘s Social Justice Fund. jmccallister@nydailynews.com
This excerpt comes from an article originally published at http://www.nydailynews.com/new-york/media-bashes-carnival-article-1.1938911