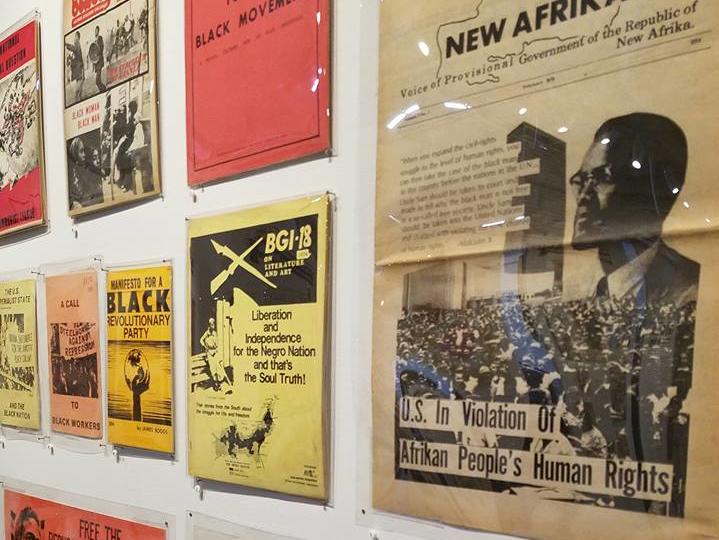 originally published at https://news.upenn.edu/news/political-activism-1970s-leads-penn-libraries-brad-duncan-role-collector
A handout Brad Duncan picked up during the 1995 Detroit newspaper strike is a first in his unique and extensive collection of printed materials, now more than 15,000 pieces.
Duncan is a staff member at the University of Pennsylvania’s Van Pelt-Dietrich Library, currently working in the interlibrary loan section after three years at the Kislak Center for Special Collections, Rare Books and Manuscripts.
Selections from Duncan’s collection is on display in a special exhibition, “Finally Got the News: The Printed Legacy of the U.S. Radical Left, 1970-1979,” at Interference Archive in Brooklyn through May 14. Organized by Duncan and the Interference Archive, the exhibition is accompanied by a 200-page book.​​​​​​​
“My background as a collector was inspired by becoming very political in my teens,” says Duncan, 38. “I became interested in radical movements that have challenged the status quo and racism in different ways.”
​​​​​​​David McKnight, director of Penn’s Rare Book and Manuscript Library, said Duncan is a true collector who is “very meticulous” in his approach and care of the items he chooses.
Duncan also chronicles his progress in a blog: The R.F. Kampfer Revolutionary Literature Archive.
“After I saw his collection,” says McKnight, “it was very apparent that he is a very serious collector. And that in itself is unusual especially for someone his age.”
McKnight witnessed the same level of meticulousness when he and Duncan worked together on a three-year project to sort through 220,000 boxes of boxes of books and other printed material the Penn Libraries inherited when the Gotham Book Mart in New York City closed.
To choose what items to include in the Archive exhibit, Duncan says his goal was to illustrate the rise and fall of radical movements during the decade.
“I wanted an authentic narrative,” he said, and “1970 is when the movements are the strongest. By 1979 many of these organizations don’t exist. It shows the historical arc.”
Interference Archive is an open-stacks archival collection and study center, run by volunteers, which produces publications and public programs on the history of social movements.
“We worked with Brad on framing a scope for this exhibition that would foster dialogue around a broad set of themes, issues and movements active in the 1970s and that would lead us to important conversations around similar issues we face today, as well as contemporary organizing efforts to address these issues,” said Jen Hoyer, an Archive volunteer.
Hundreds of people attended the January opening, and a steady stream of visitors has continued since, Hoyer said, adding that there has been great interest in the free programming related to the exhibition, including a reading group.
The effort started when Duncan realized that the history books he was reading during his late teens in 1990s suburban Detroit did not go into detail about radical activist movements. Describing his large and growing collection, he says he decided to fill in the gaps for himself.
“It became my mission to complete the story. What happened to these movements?” says Duncan, who is a graduate of Hampshire College. “I started to collect primary sources. I was looking for original materials.”
Focused on the radical left social movements, not only in the United States but in several other nations, Duncan collects printed works such as fliers, posters, pamphlets, newspapers and record album covers.
​​​​​​​A good number of the items are handmade for protest events. They are rare, as they were not designed to be kept or preserved. Many of the pieces still exist only because they were put in a boxes and forgotten, then decades later put out at yard sales and book shops as people clean out their garages and attics.

​​​​​​​“I started developing mentor relationships with people who lived through the anti-war, women’s liberation movements, who got jobs in factories to help organize labor,” he says.
“They collected this stuff just because they were a part of these movements. They see how passionate I am in researching this history, giving a new life to this literature, and they donate their collections to me.”
Detroit has been the perfect place to collect these materials, Duncan says, because of the city’s 20th-century history of radical protest movements, including labor and workplace struggles, Black Power and black nationalism and the women’s liberation movement. Used book stores are among his favorite haunts.
“I have been pursuing this for 20 years, and there is no richer source for primary material,” Duncan said. “Detroit has more, rare printed materials produced by the movements themselves than nearly any other place in America.”
Although everything Duncan collects is related to radical left social movements, the topics are numerous and global in scale, including countries in Africa, Asia, Latin America and Europe. He is especially interested in where the movements overlap, especially in the 1960s and 1970s.
Another focus is how these printed materials were used as a political organizing tool, especially in countries under occupation, or in U.S. factories to communicate with co-workers.
“It’s about creating a counter-narrative to the government or management,” he said.
Duncan started working at Penn Libraries in 2011, not long after he moved to Philadelphia from Michigan.
McKnight says he is impressed with the “exhaustiveness” of Duncan’s approach to try to get everything possible within each area of interest, another hallmark of a true collector.
“Brad is collecting an important area,” McKnight said. “He is documenting the political and social movements in a very comprehensive way.”