Talk and Screening with Robert Machover and Norman Fruchter 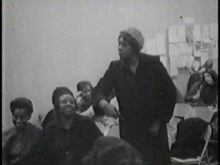 Filmmaking played an active role at the Free University of New York in 1965-66, as evidenced by the work of Norman Fruchter and Robert Machover. Fruchter presented a course called ‘Film Form: Propaganda into Art’, and Machover offered a workshop with the aim of producing a film collectively under the title ‘Filmmaking’. This led to creation of the film Dog Burning at Noon, a short film shot in the streets of New York as a comment on the escalating Vietnam War. Interference Archive is thrilled to host the world premiere of Dog Burning at Noon (5 min).

Fruchter and Machover were active as filmmakers and activists in the Students for a Democratic Society community program in the slums of Newark. This group of young activists worked with the predominately black community in their struggle against poverty and low quality housing. As a part of this program, Machover and Fruchter produced the film Troublemakers (1966), a direct cinema-style documentary about living conditions in Newark and the young SDS organizers working with  people there. We will screen an excerpt from the film. Among the activists featured in Troublemakers are former SDS president Tom Hayden. This film was produced before the Newark riot that unfolded in the same area in 1967.

Fruchter and Machover continued as filmmakers to become important parts of the Newsreel collective from 1967 onward. The talk will raise questions about student activism both within the frames of FUNY and in wider society, as well as the role of filmmaking as part of social struggle.

Robert Machover has photographed and edited over 25 films, in addition to producing and/or directing. He is a longtime Newsreel member in New York, San Francisco and Atlanta, and has taught filmmaking at Free Universities in New York and St. Louis.

Norman Fruchter is currently a Deputy Director for Policy, Research and Evaluation at NYU’s Metro Center. He has directed an alternative high school for dropouts in Newark, and an alternative B.A. program for community activists and public sector workers in Jersey City. He has published Urban Schools, Public Will; Choosing Equality: The Case for Democratic Schooling; and Hard Lessons: Public Schools and Privatization. Fruchter also published two novels and co-directed several documentaries as part of the Newsreel Collective .

This event is part of a project sponsored by a Humanities New York Action Grant. Any views expressed in this exhibition do not necessarily represent those of the National Endowment for the Humanities.