The Days of the Commune 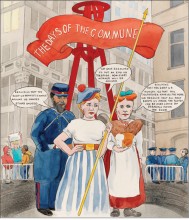 In spring 2012, Zoe Beloff (director) brought together a group of actors, activists, and artists to perform Bertolt Brecht’s play “The Days of the Commune” in solidarity with Occupy Wall Street. Thinking about OWS as a radical theater of the people offered inspiration to conceptualize this project as a “work in progress” in a sense that all social movements are a work in progress. Rather than stage the play in a theater, it was performed scene by scene in public spaces around New York City. These public rehearsals ran from March through May, the months of the Paris Commune’s brief existence in spring 1871.

The Paris Commune was the first great modern occupation; working people took over their city and turned it into a progressive democracy of the people. Brecht shows us everyday life during the Commune, and at the same time asks us to think about how political and economic forces shape lived experience. His play invites us to imagine what would happen if a new kind of people’s democracy took over a city today. How could it survive against the forces of global capital? How should it respond to armed attack? The twentieth-century German marxist playwright doesn’t provide answers. Instead, Brecht invites each of us to think for ourselves.

View Days of Commune on Ubuweb