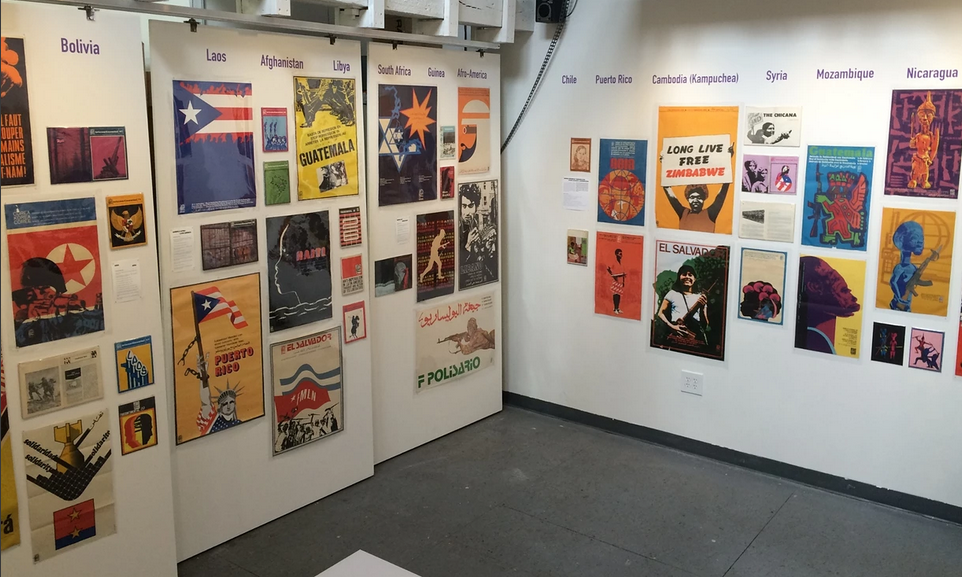 Locating a spirit of resistance and revolution in established art and cultural institutions can often be a dispiriting undertaking. But not so at Interference Archive, a cooperative, volunteer-supported institution in the Gowanus neighbourhood of Brooklyn which, in a season of political and religious challenge to mainstream institutional thinking, has a finger on the pulse.
The two-room space is the brainchild of graphic artist Josh MacPhee and his late partner, activist Dara Greenwald. Recent exhibitions include If a Song Could be Freedom … Organised Sounds of Resistance, a survey of the sounds and images of music that accompanies social struggle. It is currently showing Armed by Design, a comprehensive survey of the graphic art produced for Tricontinental magazine by the Havana-based Organisation of Solidarity of the Peoples of Africa, Asia and Latin America (Organización de Solidaridad con los Pueblos de Asia, África y América Latina, abbrieviated as Ospaal) in support of the global south liberation movements of the 60s and 70s.
In conception, MacPhee explains, the archive explores the relationship between cultural production and social movements: in other words, “material produced by people organising to transform the world”.
In practice the material is drawn from the progressive or radical left, from the Black Panthers to the Weather Underground as well as dozens of groups and individuals whose efforts are beginning to fade from memory. There’s a small amount of rightwing material from the white supremacist and Tea Party movements gathered, perhaps, in the spirit of keeping an eye on what others are up to.
“We’re not purely, ideologicaly driven with a capital ‘I’,” explains MacPhee. “We’re progressive but everyone comes in with a different political perspective.”
The concept for the archive came out Signs of Change, an exhibition of social movements curated by Greenwald and MacPhee at New York’s Exit Art in 2008. The impetus came from the Occupy movement, which was handicapped by a lack of ready access to knowledge of its political predecessors.
Preserving the material is only meaningful if it continues to be used, MacPhee says. “It was produced with the intention of distribution. The ideas are there to be engaged with and to be brought back out in the world. Hopefully there’s an effect and new things come into the archive.”
The current exhibition is a fascinating tour of 60s and 70s radical politics and its heroes: Amílcar Cabral, the Guinea-Bissauan anticolonial leader assassinated by a Portuguese death squad; Frantz Fanon, author of Black Skin, White Masks; and Carlos Marighella, the Brazilian Marxist revolutionary and writer who contributed the Minimanual of the Urban Guerrilla to literature.
It’s striking how much of Ospaal’s production contains symbols of weaponry. “The Cubans were proponents of armed struggle and that was a reasonable position in the 1960s,” explains MacPhee. “Representations of 14-year-old child soldiers with guns means something entirely different now. Africa is awash in AK-47s.”
Vero Ordaz, one the exhibition’s co-curators, said she was struck by the optimism of Ospaal. “You have to remember Cuba had a successful revolution. They didn’t wait for everything to be perfect and that confidence is carried in the posters. They show a lack of fear we don’t have right now.”
For the current show, Interference Archive commissioned artists, many connected to the arts cooperative Justseeds.org, to produce a series of new posters; for the Organised Sounds of Resistance show, a 7-inch single and a series of online mixtapes.
The archive’s wealth of books, posters, underground newspapers produced by social movements raises the question: what does solidarity look like today?
“It’s not conceived in the same way as it was at the height of the Ospaal poster production,” says Ordaz. “It’s not about armed struggle and overthrows but slow coalition building. There’s lot more surveillance now and that’s changed how it can be organised.”
With a radical pope, the emergence of Bernie Sanders in the US and the rise of Jeremy Corbyn in the UK, perhaps there is some reason for optimism.
According to MacPhee, part of the problem is that ordinary people no longer have access to political power. “We can think all we want but there are no levers to pull and most organisations have been dismantled. Unions are some of the last social bodies – and they’re barely allowed [in the US].”
The conversation may be shifting, concedes Justseeds member and anarchist Kevin Caplicki, but the concept that voting with your dollars is participation rather than consumption is misleading.
“You can choose Coke or Pepsi or organic toilet paper but that’s not participation. It’s not active resistance to capitalism, the ultimate issue that’s destroying our planet and our way of life.”
Interference Archive is far removed from the realm of commercial art galleries, oligarch collectors, the show-palace museums of billionaire real estate developers, and under the watch of gun-toting revolutionaries from several decades back – and is far the richer for it.
“We organised the space collaboratively based on things we’ve learned along the way,” says MacPhee. “It’s about the qualities of the life you want and the changes you desire. We didn’t want to set up a big, fancy space. We want relationships with the people who come through the door and the people who fund us, and to do that on a societal level and in your life.”
Interference Archive is at 131 8th Street, Brooklyn, New York
Article by Edward Helmore
originally published at http://www.theguardian.com/artanddesign/2015/oct/14/art-of-protest-interference-archive-brooklyn