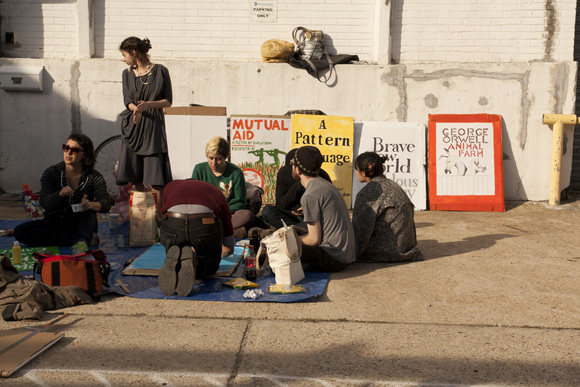 “Reach for the Book– Its a Weapon”

The components of a book shield are relatively simple: two large pieces of thick cardboard glued together, an old bicycle inner tube (for flexible handles), and plastic wrap. This is to keep the shield from getting soggy in wet weather, but perhaps more importantly to protect the shield’s design—inked covers of such books as Frantz Fanon’s “The Wretched of the Earth,” George Orwell’s “Animal Farm,” and “Ain’t I a Woman,” by Bell Hooks. These shields, also known as book blocs, are brandished as defensive screens during protests against tuition hikes at increasingly embattled educational institutions. Zoltán Glück, a PhD student in anthropology at CUNY Graduate Center, carried “Grapes of Wrath” during a protest at Baruch College in November, 2011. Reinforced with hard foam, it enabled him to stand his ground against security guards—until they grabbed it and ripped it in half.

The book blocs were on view recently in a small but potent exhibition at the Interference Archive, an intimate space in a factory building in Gowanus, dedicated to preserving texts and ephemera produced by radical activists. Floor-to-ceiling shelves hold boxes with labels such as “International ’68,” “Feminist / Queer / Riot Grrrl,” and “Communes and Alternative Economies.” A clear plastic bin is filled with pink T-shirts used by Pink Bloque, a Chicago-based dance troupe known for their impromptu, feminism-awareness-raising performances in the streets.
The exhibition turned out to be depressingly prescient. On April 23rd, Cooper Union announced that, starting in the fall of 2014, incoming students would be charged $19,250 in tuition. The news was a major disappointment to the students, alumni, and faculty of the hundred-and-fifty-four-year-old art, architecture, and engineering school, founded by the industrialist Peter Cooper, in 1859, with the explicit goal of making education accessible to all—the working class, men and women, anyone who wanted to learn.
In a provocative piece in the Brooklyn Rail last year, when it began to seem likely that Cooper would start charging tuition, Litia Perta, an adjunct professor at the school, analyzed the shifts in the way higher education is perceived in the U.S. “The discourse has become one of investment,” she wrote. “Exorbitant loans are justified on the grounds of the value of the product they purport to put out—namely, students that generate income (which then, in theory, enables them to pay off their educational debt).” Tuition-free public universities, aside from the armed-forces colleges, are almost completely obsolete.
Book blocs were first seen in New York on November 17, 2011, during a protest against tuition hikes at CUNY. Many of the titles were chosen from the five thousand five hundred and fifty-four books in the People’s Library at Zuccotti Park, formed during Occupy Wall Street, which has since been eviscerated by N.Y.P.D. (On April 9th, the city acknowledged that it participated in ruining the library and confiscating the materials, and is paying O.W.S. and their lawyers over two hundred and thirty thousand dollars in a settlement.)
Michele Hardesty, an English professor at Hampshire College, volunteered at the People’s Library, and has since become interested in how books are utilized in social movements. She is now an amateur historian of the book bloc. “I’ve been trying to trace the constant thread of thinking of books as imbued with spirit or life, which has a long history” says Hardesty, citing as an example Milton’s “Areopagitica,” a defense against book burnings written in 1644, during a period of severe official censorship in England. “He who destroys a good book, kills reason itself,” Milton wrote. Hardesty has also discovered that when books aren’t metaphorically alive they are metaphorically dangerous: as Bertolt Brecht said, “Hungry one, reach for the book—it is a weapon.”
Hardesty notes that the book bloc symbolizes not only diminishing prospects of affordable education but the demise of the book as well: “It is a metonym for education at the same time the materiality of the book is being threatened.” Josh MacPhee, one of the founders of the Interference Archive, who is a graphic designer, also noted this dual symbolism. As he begins designing more and more eBooks, he has started to miss designing covers. “The codex has existed for five thousand years, and the cover is the first representation of the ideas that you will encounter inside,” he says. For him, the physical presence of the book has a particular significance. “[Book blocs] represent the book as potentially dangerous or protective, aggressive or defensive. It’s a take on their material value that relates to bodies, not just brains.”
As education becomes less accessible, some are rallying to reverse the trend. Free University, an organization loosely based on the idea of free education for all, is staging an “education convergence” in Cooper Square on Wednesday, in honor of May Day. One of the organizers of Free University, Conor Reed, an adjunct professor at Baruch and a PhD student in literature at CUNY, explains that it is drawing on historic models, such as the Freedom Schools in the South and the Highlander Folk School, founded in Tennessee, in 1932, to support a growing interest in labor movements throughout Appalachia. “It’s a radical approach to pedagogy that we haven’t invented but are trying to sustain,” says Reed.
Until they were confiscated by the N.Y.P.D., which deemed them weapons, at around 1 P.M.on Wednesday, the book blocs at the Interference Archive were scheduled to make an appearance at the May Day event, including several new ones made during a workshop on April 14th. MacPhee made three that day, selecting books that were meaningful to him: Aldous Huxley’s “Brave New World” (“such a clean and efficient cover”), Ousmane Sembène’s 1960 novel “God’s Bits of Wood” (“maybe the first shield using a book by an African author”), and Peter Kropotkin’s 1902 treatise, “Mutual Aid: A Factor of Evolution.” Kropotkin, MacPhee said, was an anarchist and Darwin’s contemporary, who argued that coöperation is just as important a factor in evolution as competition. Though Kropotkin’s arguments were not as scientifically rigorous as Darwin’s, evolutionary biologists, including Stephen Jay Gould, have since come to his defense. “We are awash in Social Darwinism,” says MacPhee, “and it so often goes unchecked. But when anyone extracts a more coöperative trait from nature or human beings, then they’re naïve.”
Claire Barliant is a writer based in Brooklyn. She contributes art listings to the Goings On About Town section of the magazine.
Photograph by Interference Archive.