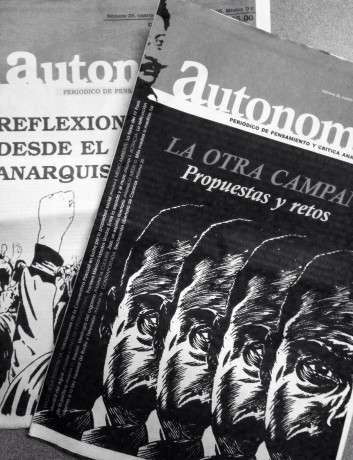 Trying to put a dent in a large donation of materials from Latin America in the range of 2002-2007.
These Autonomía newspapers were published in Mexico City, edited by the Colectivo Autonómo Magonista (CAMA) in 2005/2006. They’re well designed and contain a lot of well cited graphics and illustrations from artists like Rini Templeton (pictured below) and Eric Drooker. The work of these two artists is quite recognizable to most in radical left cultures. Their work is frequently reproduced in print, on shirts, banners and many other mediums that it is nearly part of the commons. It is this kind of relationship of art and politics that inspire groups like Justseeds to continue producing art.

If you aren’t familiar with either of the aforementioned artists, drop by during open hours for a lesson. We have books, prints and other resources on them, and many others. As for the newspapers I’ll be filing them in our wooden flat file where our periodicals live. Come by and check em out 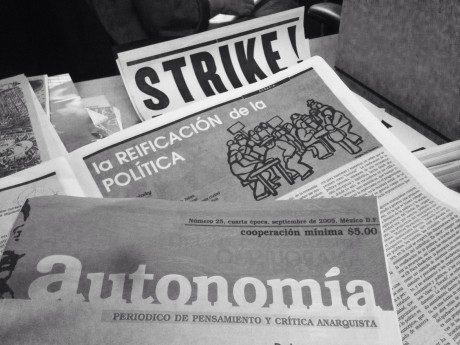 Strike! poster from some May Day 2014 materials.