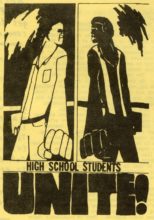 May 2020 marks the 50th anniversary of the Kent State and Jackson State massacres, which set off a historically large-scale student strike across the nation. With the anniversary as an entry point and frame of reference, Walkout: A Brief History of Student Organizing uses archival material from the Interference Archive collection—posters, buttons, pamphlets, flyers, zines, and more—to examine the broader scope of student movements that both led up to and followed in the wake of May 1970.

From its roots in the changes wrought by World War II  through the civil rights  and anti-war movements  of the 1960s, Walkout traces major themes that led American students to strike in 1970 and that have propelled them since, with reference to international movements that influenced tactics and issues for agitation. Of significant note is the way that the graphic production of these movements helps us trace the impact of movements across generations: Walkout showcases material from student art collectives communicating their demands through visual material, including the Atelier Populaire (Paris, 1968), Poster Factory (Wisconsin, 1970), WIMP Collective (New York, 1970), Sublevarte Colectivo (Mexico, 1999), and École de la Montagne Rouge (Montreal, 2012).