Weichanmu: the Mapuche struggle in Chile 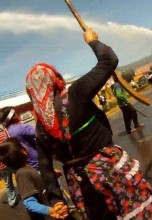 Representatives from the Portland Central America Solidarity Committee will share a short documentary, filmed during the last year, about the Mapuche conflict in Chile.

Arauco: the longest war in history is a series of documentaries detailing the impact of the forestry industry in southern Chile. The first chapter of this series is entitled Weichanmu, which means “we are going to war” in the indigenous Mapuche language.  In this short film we follow a group of Mapuches in their reclamation of ancestral territory, usurped by the forestry company Arauco over forty years ago.

The Mapuches are the only indigenous people undefeated by the Spanish conquest and recognized by the Spanish crown.  They remained a separate nation until the 1800s, when Chile gained independence and implemented a genocidal policy against the Mapuches known as “The Pacification of the Araucanía.” For over 400 years, the Mapuches have been fighting to regain their territory, which today is primarily in the hands of large multi-national forestry companies such as Arauco, privatized by the Pinochet dictatorship and heavily subsidized by the government ever since.

Weichanmu is a look at how the Mapuche struggle has transformed since the Spanish conquest, and how this struggle continues today as a fight for autonomy against private industries and the Chilean government, and against the capitalist system that unites them against the Mapuche people.