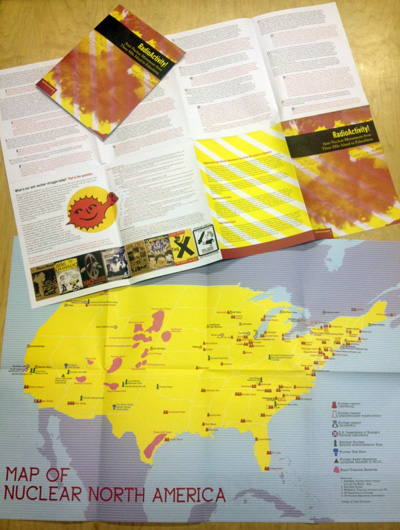 In October 2012, Interference Archive collaborated with the activist and research group Todos Somos Japon to produce the exhibition RadioActivity! Anti-nuclear Movements from Three Mile Island to Fukushima. The exhibit featured over a hundred pieces of antinuclear movement culture (posters, photographs, buttons, T-shirts, patches, banners, and publications) from the 1960s, 1970s, and 1980s as well as the contemporary culture developing as part of the protest movement in Japan post-Fukushima.
This booklet contains information about the RadioActivity! exhibition, twenty-six short texts about the history of nuclear power and the movements against it, and nine images of antinuclear posters and publications featured in the show. It also folds out into a large-scale map of the nuclear facilities in the United States and Canada, and is intended to be a tool for antinuclear activists to use today.
This is Interference Document 4, part of a series of publications coming out of the collection at and work of Interference Archive.
full color offset printed booklet/map
7.75″ x 10.5″ as folded booklet, 31.5″ x 21.5″ as unfolded map
print run of 1,000
$5