What’s Art Got to Do with It? Performativity & the SOAW 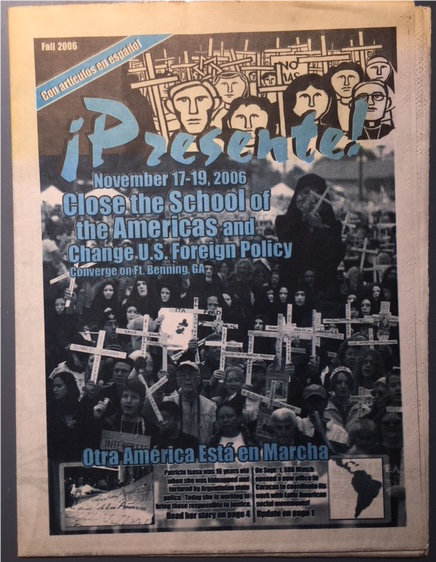 Introducing the SOAW: A View from Kenyon College
In Fall 2018, Kenyon College’s Gund Gallery featured materials from Interference Archive that included pamphlets and posters detailing protest, performance, and group solidarity events produced by the organization the School of the Americas Watch (SOAW). SOAW activists Dévora González and María Luisa Rosal visited campus and led a discussion with our “Transnational Social Movements” Sociology class. Reflecting on the experience, we were drawn to the various ways that this group historically and currently partakes in performative protest and a variety of art forms to advance their mission. Our positionality as sociology students is reflected in the manner we engaged with the materials and activists as well as the content of the blog. Our blog presents the history of the SOAW, outlines their performance tactics, and discusses their move from Fort Benning, GA to the U.S-Mexico border.


History of the SOA & the SOAW

Founded in 1990 as a response to state-sanctioned violence in Latin America by School of the Americas graduates, the SOAW has the primary goal of shutting down the SOA, which was reopened in 2001 as the Western Hemisphere Institute for Security Cooperation (WHINSC). The SOA, founded in 1984, was a military academy in the U.S. located at Fort Benning, GA, that trained high-ranking military personnel from all over the world, but primarily from Latin America. Since then, investigations have found that the SOA used training manuals that taught torture methods, and studies have shown a correlation between time spent at the school and likelihood to commit a human rights violation (Cohn 2012, McCoy 2005).
However, research has not yet demonstrated conclusively that the SOA’s curriculum and training directly cause human rights violations. The number of SOA graduates who have committed human rights violations is undoubtedly high, but it is difficult to prove that this is not simply a correlation rather than a causal relationship. This calls for in-depth research which could generate more evidence and connect the already established facts in a more concrete manner.
Tactics: Performance Art & Activism
After initially demonstrating in Fort Benning, GA., the SOAW turned its attention to the U.S.-Mexico border in 2015 in order to raise public awareness of militarized U.S. foreign policy as a principal cause of migration. The organization argues that increased immigration is a direct result of U.S. intervention politically, economically, and most importantly militarily in Latin America. The success of the SOAW in this effort depends on its performative tactics. The SOAW is known for its moving vigils and processions (Nepstad 2004, 150-151); at these gatherings and demonstrations, activists carry white crosses and chant “¡presente!” in response to a victim’s name being called, pallbearers dress in black robes and carry cardboard coffins, and at other points, activists splattered in red paint lay down as a pile of bodies to represent the effects of violent border militarization.

In our interpretation and discussion of these tactics, we rely heavily on Jan Cohen-Cruz’s work, Radical Street Performance, to guide our explanation of the various dynamics present in a given style of protest. SOAW employs a diverse repertoire of performative tactics. The “¡presente!” call and response exercise, for instance, illustrates an example of what Cohen-Cruz would call integrative street performance, as the theatrical experience is thrust into the lives of bystanders and enables onlookers to physically and verbally participate in the emotional experience of the demonstration.
The procession of pallbearers and blood-splattered bodies, on the other hand, is an exercise in bearing witness, as these performative tactics are focused on bringing an issue to the attention of the public eye and obliging witnesses to take stock of the issue being presented. At the border, annual encuentros––demonstrations and ceremonies that symbolize unification or transcendence of the physical border— construct utopian environments where people of all backgrounds and nationalities are not separated by arbitrary lines and fences. The participants of the encuentros thus live out the society they wish to see come into being. In sum, SOAW’s diverse tactical repertoire plays an instrumental role in the organization’s effort to make public the hidden transcript of border violence.

Concluding Reflections
Our study of the SOAW helped us understand how a social movement organization can work to challenge existing power structures and dominant social narratives. We greatly valued the opportunity to engage with SOAW activists, as the organization proved to be exemplary of the ways social movements operate and persist over time. Additionally, the SOAW pushed us toward a deeper understanding of contemporary issues, such as the border wall and the caravan from Central America, as well as the often overlooked role of the U.S. in migration patterns. Our sociological examination of the SOAW has indeed inspired us to dig deeper into the current events surrounding the U.S.-Mexico border, all while maintaining our sociological lens.

The SOAW ephemera has led our class to explore the connection between performance and social movement activism, especially in today’s context. Viewing the ephemera, talking to the SOAW activists, and conducting our own research on the SOAW allowed us a more nuanced perspective on the SOAW as a social movement that we hope you have found valuable. We hope this blog has also shed light on the complexity of social networking and relationships across borders. With help from Interference Archive, we (as undergraduate students) were able to further our own knowledge of social movements and advocate for researchers to fill the gap in evidence we are presented with.
Acknowledgements
We would like to extend our thanks to Jodi Kovach, the Curator of Academic Programs at Kenyon College’s Gund Gallery, Interference Archive for making this learning experience possible, and the SOAW and activists Dévora González and María Luisa Rosal. We would like to thank Professor Johnson for guidance, editing, and making this all possible.
References & Further Reading
Cohn, Marjorie. 2012. “Teaching Torture at the School of the Americas.” Thomas Jefferson Law Review 35(1): 1-14.
Cohen-Cruz, Jan, ed. 1998. Radical Street Performance: An International Anthology. New York: Routledge.
Gallo-Cruz, Selina. 2012. “Negotiating the Lines of Contention: Counterframing & Boundary Work in the School of the Americas Debate.” Sociological Forum 27(1): 21-45
Grimmet, Richard F. and Mark P. Sullivan. 2001. “U.S. Army School of the Americas: Background and Congressional Concerns.” Washington, DC: Congressional Research Service, Foreign Affairs, Defense, and Trade Division.
McCoy, Katherine E. 2005. “Trained to Torture? The Human Rights Effects of Military Training at the School of the Americas.” Latin American Perspectives 32(6): 47-64.
Nepstad, Sharon Erickson. 2004. Convictions of the Soul: Religion, Culture & Agency in the Central America Solidarity Movement. Oxford & New York: Oxford University Press.
Pavey, Steve. 2017. “Defying U.S.-Sanctioned Violence at the Border: The School of the Americas Watch Encuentro resists the deepening militarization of the U.S.-Mexico borderlands.” NACLA Report of the Americas 49(2): 165-172
Rosal, María Luisa & Arturo J. Viscarra. 2016 “Report: Moving Solidarity.” NPR. Retrieved October 19, 2018. https://nacla.org/news/2016/05/19/report-moving-solidarity
Williams, Ginger & Jennifer Disney. 2015. “Militarism & Its Discontents: Neoliberalism, Repression, & Resistance in Twenty-First Century US-Latin American Relations.” Social Justice 41(3): 1-28.
Documentary Films
Hidden in Plain Sight. Raven’s Call Productions, 2003. 71 min.
On the Line. Films Media Group, 2009. 90 min.
School of the Assassins. Richter Productions. 1994. 18 min.
Other Useful Links
Tweets by Close the SOA
SOA Watch material in the TriCollege Archives
Resources from Amnesty International