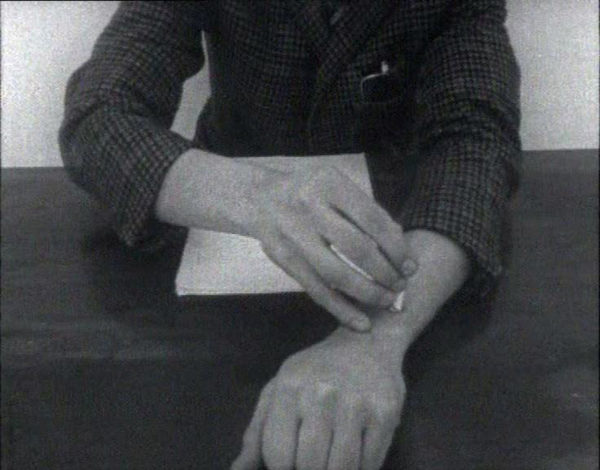 Saturday, September 8, 7pm
Interference is thrilled to bring in acclaimed filmmaker Jill Godmilow for a screening of her 1998 short What Farocki Taught, followed by an open discussion about agitprop film and its evolution throughout her career. This will be a treat for anyone who creates or consumes political media. Her feature film Far from Poland will also be screened at Interference Archive on Tuesday Sept 11.
What Farocki Taught is a remake of German political filmmaker Harun Farocki’s astute 1969 agitprop film Inextinguishable Fire. Produced in Germany at the height of the Vietnam War, Farocki attempted to make the incomprehensible visible: the physical properties of Napalm B, designed to burn at 3,000 degrees F and stick to human skin. The film demonstrates the systematic impossibility of resistance to its production by Dow Chemical Corp employees and the inevitability of its use by the U.S. in Vietnam. Because Farocki’s Inextinguishable Fire was never distributed in the U.S. and remains mostly unavailable to American audiences, Godmilow’s What Farocki Taught is a kind of film re-distribution, to see if the radical potential of the documentary project can be revived.
Godmilow closely studied Inextinguishable Fire by re-making it. Farocki’s film is radical in technique – taking up one of the hottest political questions – the production of terror – and cooling it down to frank, rational substance, and refusing the pornography of documentary “evidence”, instead replacing it with Brechtian reconstruction and demonstration. In a unique agitprop style, Inextinguishable Fire reaches beyond the specific terrors of napalm and provokes baseline questions about the ethics of labor and the distributed responsibility of war. And Godmilow tacks onto this questions of documentary filmmaking – a film on the borders of pedagogy, distribution, and film history.
“… a bracing exercise in political filmmaking and pedagogy for the late nineties – resurrecting the Brechtian frontal attack, both on an economic system intent on the manufacture of death and on the COMPLACENCY of documentary realism” – Michael Renov, USC School of Cinema and Television Studies
“… a strangely mesmerizing film about the horrors of chemical warfare.  Avoiding the direct representation of effects in favor of reconstruction of means, Jill Godmilow  creates a space for reflection as much about the nature of evidence as what the evidence says about the values and ethics of the military-industrial complex on which contemporary America is built.”   Michael Chanov, London School of Economics.
Godmilow’s work includes the Academy Award nominated (and Library of Congress National Film Registry-inducted) Antonia: A Portrait Of The Woman (1974); Far from Poland, (1984) the post-realist documentary feature about the rise of the Polish Solidarity movement; Waiting for the Moon (1987), a feminist/modernist fictional feature about the lives of the literary couple Alice B. Toklas and Gertrude Stein (1st prize, Sundance Film Festival); Roy Cohn/Jack Smith (1995), a cinematic translation of a theater piece by performance artist Ron Vawter; a 6 hour, DVD archive, Lear ’87 Archive (Condensed) about the NYC theatrical collective, Mabou Mines, producing a fully gender-reversed production of Shakespeare’s “King Lear”; and most recently a replica of the 1976 French film, SCUM Manifesto, which performs Valerie Solanas’ famous text against newsreel of current activities of the Polish state.
She recently compiled a 4-disc DVD collection Disruptive Film: Everyday Resistance to Power of 50 short, post-realist, political, non-fiction films – from France, Chiapas, Serbia, China, and more – that propose forms of successful resistance strategies to power.
This event is part of the exhibition Agitate! Educate! Organize! Agit Prop into the 21st Century, which is a project sponsored, in part, by the Greater New York Arts Development Fund of the New York City Department of Cultural Affairs, administered by Brooklyn Arts Council (BAC).