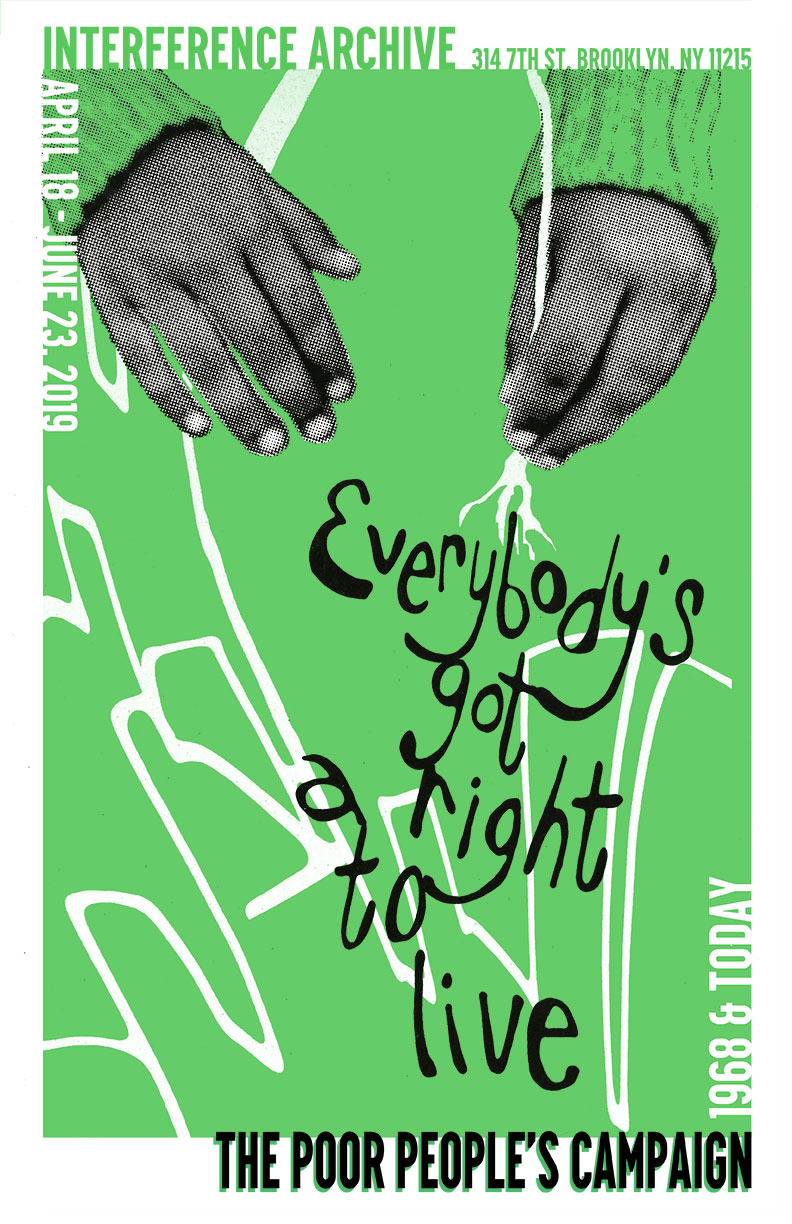 Everybody’s Got A Right To Live: The Poor People’s Campaign 1968 & Now

Opening reception: Thursday, April 18, 6-9pm
Join Interference Archive, and local leaders and organizers from the NYC Poor People’s Campaign for the opening of Everybody’s Got a Right to Live: The Poor People’s Campaign 1968 & Now. The exhibition will launch with a reception at 6 p.m. followed by a special teach-in at 7 p.m. on the history of the 1968 Poor People’s Campaign and current efforts to re-ignite the unfinished business through the Poor People’s Campaign: A National Call for Moral Revival. Engaging visual materials from the campaign (banners, flyers, books, buttons, photographs) and featuring posters created in solidarity with the Justseeds Collective, we will explore how we continue to move art into action.

Described as Martin Luther King Jr.’s “last great dream,” the Poor People’s Campaign of 1968 was an ambitious movement to make poverty in the world’s richest nation visible and to demand justice for poor Americans. King, taking note of how economic disenfranchisement had persisted in the U.S. despite the American civil rights movement’s legal victories, envisioned a “nonviolent army of the poor” marching to Washington to demand good jobs, guaranteed income, and affordable housing. He worked with organizers from the Southern Christian Leadership Conference to  foster a movement by and for poor people of all races, shifting his focus from civil rights to identify poverty in the U.S. as fundamentally a human rights issue. Despite considerable challenges and King’s assassination in April 1968, others carried on his efforts, presenting an ‘Economic Bill of Rights’ to Congress that May, and setting up a 3,000 person protest camp on the Washington Mall that was dubbed ‘Resurrection City.’

The Poor People’s Campaign struggled to define itself as a multi-axis movement while it faced political suppression from the state, ultimately derailing its reform goals and leading some to consider it a failure; however,  its spirit and intention has carried on into the present day within a growing resurgence campaign seeking to call attention to the unmet demands of ‘68. The Poor People’s Campaign: A National Call for Moral Revival, led by Reverend William Barber II and Reverend Liz Theoharis, now responds to an ever-worsening poverty crisis. At the forefront of the new grassroots campaign’s concerns is the    acceleration of economic inequality, but they also seek to address many of the more insidious structural inequalities that arise out of conditions of poverty: new unjust policies like voter suppression laws, mass incarceration rates that further entrench the U.S.’s systemic racism, a growing imbalance in federal discretionary spending on the military relative to social programs, and the intensification of racial and income disparities in access to clean air and water.

This exhibition provides a look at some of the visual culture of the original PPC, including photographs of marches and rallies, press coverage, and a contemporary public response to a mural in Resurrection City called the ‘hunger wall’ created with the DC Public Library, in addition to showcasing the efforts of the new PPC and a portfolio of Justseeds posters created in solidarity with their actions.

The first film to document the launch of the New York State Poor People’s Campaign, EMPIRE STATE RUMBLINGS tells the story of a new type of organizing seen through the eyes of four incredible women who participated in the intensity of the campaign’s beginnings. Filmed by a team of activist videographers over Forty Days of Action in the spring of 2018, as week after week, poor people from around the state gathered in Albany to confront their government and make their voices heard, EMPIRE STATE RUMBLINGS is produced by award-winning filmmaker Peter Kinoy with an original score by Brooklyn based musician/composer Dan Loomis. (30 min)

“…….the 1968 Poor People’s Campaign was grounded in a spirit of solidarity, of reconciling a troubled past, and of finding the dignity in all people. Nowhere did that emerge more poignantly than in the movement’s songs.” Angelica Aboulhosn

An evening of music and song in celebration of the history and spirit of the Poor People’s Campaign featuring an incredible line-up of contemporary musicians and movement leaders! After the concert we will lift our voices in a song circle and open jam, please bring your musical instruments and join in!