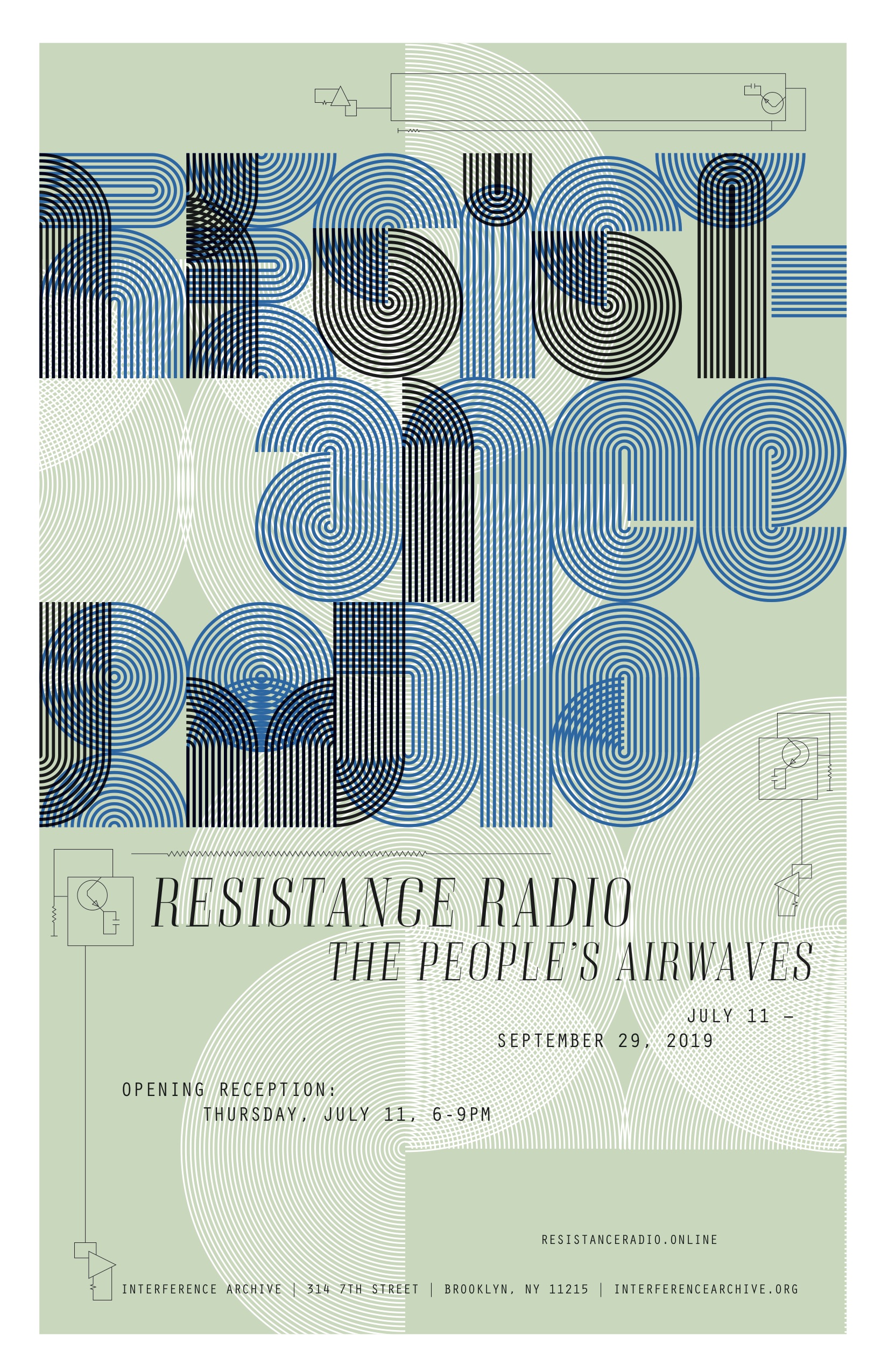 Interference Archive is pleased to announce our current exhibition, Resistance Radio: The People’s Airwaves, which looks at the history of radio as a medium for grassroots movements and their organizing work. The exhibition will be accompanied by a zine, a poster, a series of events, a pop-up FM broadcast, and a website: resistanceradio.online. The opening reception will include a live broadcast by Radio Free Gowanus at 88.5 FM.

Radio rose as a mass medium in the 1920s, and was the dominant form of popular media until at least the 1950s; even after the invention of television, it continued to be a central communication tool, the platform for both state-run media and voices of opposition. It has also been a frequent site of conflict between citizens and the state, exemplified in the United States by the FCC’s regulation of the airwaves and suppression of pirate stations. Today, radio is still very much in use: radio reaches 95% of the global population, while only 56% have internet access at home. 93% of Americans listen to the radio at least weekly, and pirate radio is thriving here in Brooklyn, serving immigrant populations and others overlooked by mainstream media. Radio has remained a consistently popular form of communication over the past decade, in part because of certain unique features: it is relatively cheap and accessible, it is a form of media that is inherently tied to its location and its local community, and it reaches populations not served by online media, including those for whom language or literacy is a barrier. Radio, both past and present, has been attractive to those who wish to embrace a DIY ethos and a spirit of resistance, and to others as a platform for community building and the development of a political consciousness.

This exhibition focuses on radio endeavors created to reach communities not served by mainstream outlets. We’re interested in the people, stations, and organizations that have battled to bring their defiant programming onto the airwaves, and particularly in cases where these actions were in service of grassroots movements and/or community organizing. Resistance Radio: The People’s Airwaves tells some of the stories of these rebellious broadcasters. While we couldn’t possibly offer a comprehensive history of resistance radio, this exhibition offers a selection of case studies from around the world, from the 1920s to today, sorted into broad themes. Each case study illuminates the varying role radio has played and can play in supporting social and political movements. To name a few examples, the Coalition of Immokalee Workers’ Radio Conciencia, based in Immokalee, Florida, is a station that developed out of and supports a national farm workers movement based in that community; WMMT’s “Calls From Home”, which broadcasts messages from loved ones around the US to folks who are incarcerated in prisons within broadcasting range, demonstrates the practical power of a medium that communicates through prison walls; and stations like Cuba’s Radio Rebelde, which broadcast on behalf of the rebel army during the Cuban Revolution, and El Salvador’s Radio Venceremos, founded to support the FMLN during the Salvadoran Civil War, served as the voice of popular uprisings. Many more stations have been devoted to serving as resources for underrepresented or oppressed communities, and independent, community, and pirate stations have helped to drive and support a variety of movements, from Black Liberation to anti-gentrification. Perhaps more than anything else, these histories illuminate the always contentious relationship between media and the state, and various ways in which this conflict has played out over the air.

Today, audio production is more accessible than ever, and podcasts continue to grow in popularity. But podcast distribution is largely reliant on corporate platforms like Apple, Spotify, or Soundcloud, and by producing digital content, we limit our audience to those with reliable internet access. It’s important for us to know what it looks like to control the means of media production, which is one reason we want to present this history. Another is to acknowledge these rebellious broadcasters as the forerunners of current efforts to democratize media distribution and production, including the development of community-owned mesh networks. Finally, we aim to ask what relevance the history of independent, pirate, and community radio has today, and how it can inform our current struggles.

Our first event will be a talk with Pete Tridish of Radio Mutiny and Prometheus Radio, Saturday, July 13, at 5pm. More details coming soon!