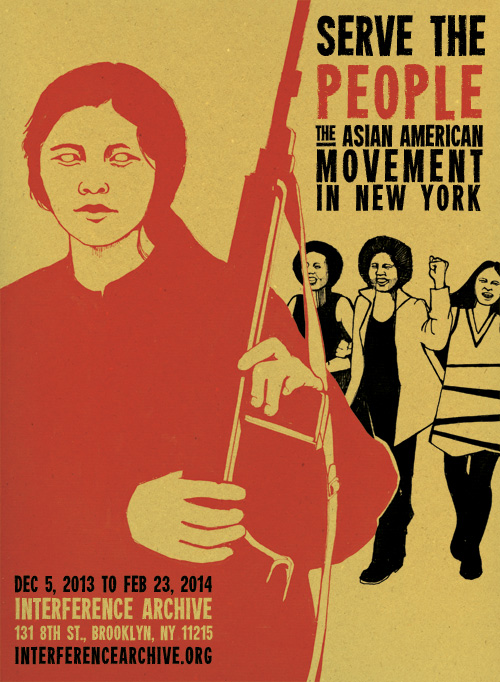 Serve the People: The Asian American Movement in New York

Serve the People: The Asian American Movement in New York charts a history of Asian American activism, organizing, and cultural production in the 1970s, the first exhibition to focus on New York as a center of this national phenomenon. Through posters, leaflets, newspapers, film, and music, Serve the People shows how Asian American identity was shaped by reclaimed histories, revolutionary politics, feminist awareness, third worldism, and community organizing. The culture created by young activists and artists in the movement embodied their ideals, speaking to the excitement and urgency of the time.

In 1970s New York, one might have heard the folk group A Grain of Sand sing about “the struggle,” walked by a mural celebrating Asian American histories, or attended a screening of a documentary on garment workers in Chinatown. I Wor Kuen and Worker’s Viewpoint Organization distributed their revolutionary messages through newspapers and study groups, while community organizations like Asian Americans for Equal Employment galvanized Chinatown into mass protests. Basement Workshop served as an umbrella for artists’ projects as well as groups like Chinatown Health Fair, Asian American Resource Center, and the Amerasia Creative Arts Program.

In recovering and presenting this past, Serve the People cuts against the stereotype of political apathy among Asian Americans, and offers a radical history for today’s activists to build upon. The political horizon for Movement activists was limitless, whether they worked towards community control, artistic self-expression, or political overthrow. This energy is palpable in the culture they produced. In light of the great immigration of Asians to America since the 1960s and the looming questions of America’s economic and political relation to Asia, these works remind us of a moment of pride and revolution for a newly-formed identity.

Visitors are invited to handle and read through two of Interference Archive’s newest acquisitions: the seminal collection of art and poetry Yellow Pearl, and copies of the nationally-circulated Bridge Magazine. Other objects on display include the Asian Americans for Action Newsletter (published by Yuri and Bill Kochiyama in their home), buttons and posters for the Chinatown Health Fair, iconic photographs of the Peter Yew police brutality protests by Corky Lee, and posters designed by artist Tomie Arai.

Photos of the exhibition can be seen on our Blog.

A full schedule of public programs will accompany the exhibition, including film screenings, discussions, and readings. Please check back here for a full list. As of now, the following events are scheduled:

Gathering the Grassroots
Over twenty organizations, representing the next generation of Asian American activism, will convene at this annual event to discuss collaboration and movement building.
Presented by the Filipino American Museum
__________

Serve the People Gallery Tour and Interference Archive Open House
A gallery tour with curator Ryan Wong. Movement activists whose work is included in the exhibition will also be present.

Walking Tour: A People’s History of Chinatown
A one-hour walking tour of major sites of struggle and community-building in Manhattan’s Chinatown during the 1970s and 80s. Viewing of exhibition at Interference Archive afterwards.
(Meet by the Statue of Confucius at Confucius Plaza, Intersection of Bowery and Division St.)
__________

Film Night: Short Films from the Movement
A sampling of short films produced during the Asian American Movement focused on reclaiming histories and capturing contemporary organizing.
Wong Sinsaang (1971) by Eddie Wong
Manzanar (1970) by Robert Nakamura
…I Told You So (1973) by Alan Kondo
Cruisin’ J-town (1974) by Duane Kubo
Co-sponsored by Visual Communications
__________
Thank you to our generous lenders: A/P/A Institute at NYU, Tomie Arai, Corky Lee, Museum of Chinese in America, Visual Communications, and Dan Wang. Original research and exhibition development for Serve the People supported by Museum of Chinese in America.