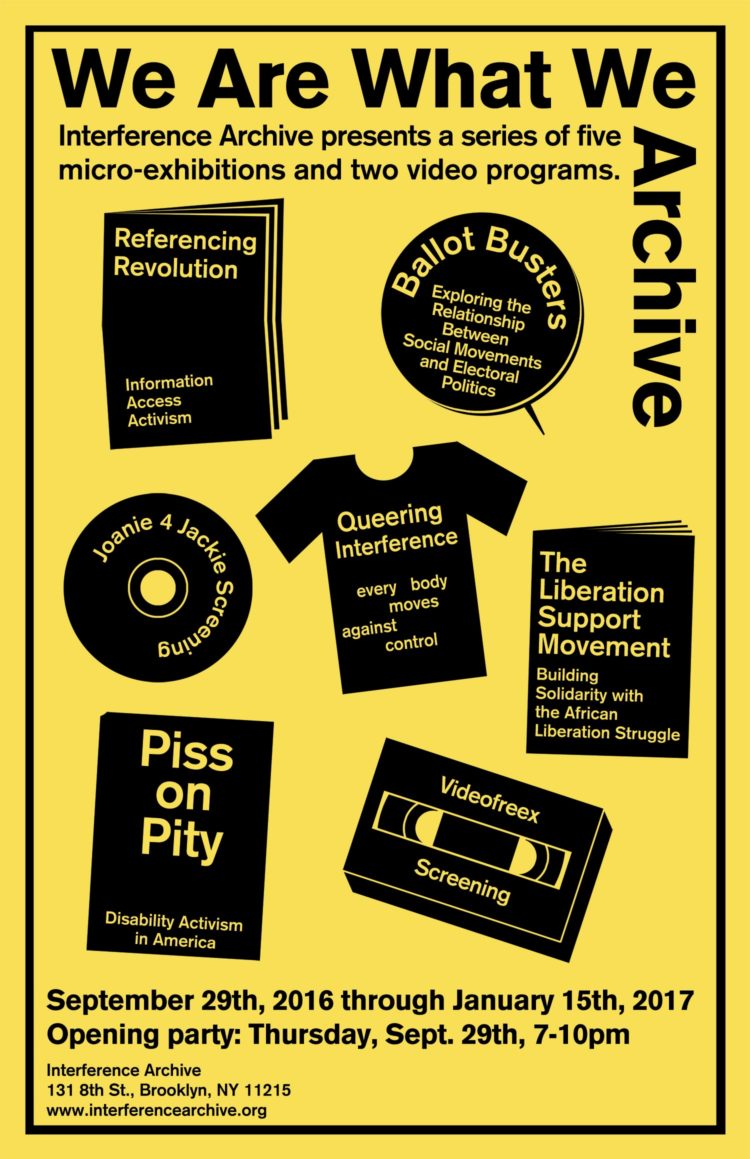 We Are What We Archive

OPENING RECEPTION: Thursday, September 29, 7-10 PM
This fall, Interference Archive presents an exhibition highlighting some of the lesser-known objects in our collection. Made up of five distinct mini-exhibitions and two film screening series, We Are What We Archive sheds light on electoral politics, North American solidarity with Africa, disability activism, queer identity, and information access, and provides unusual access to the work of the Videofreex and Miranda July’s video chainletter project, Joanie4Jackie. The exhibition will be on view through January 15, 2017.

Ballot Busters: This exhibition uses cultural ephemera to explore the relationship between social movements and electoral politics. From running their own candidates, to challenging the legitimacy of the electoral system itself, social movements have engaged with electoral politics in a range of broad and contradictory ways. As the United States once again goes to the polls, Ballot Busters is a snapshot of the creative ways people have confronted voting. Organized by Charlie Morgan and Vero Ordaz. 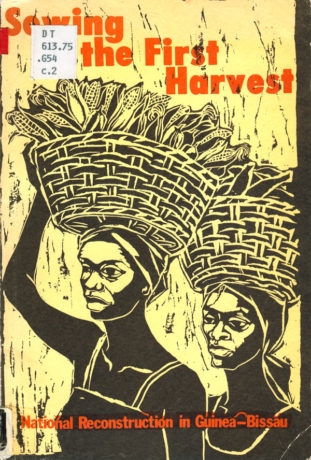 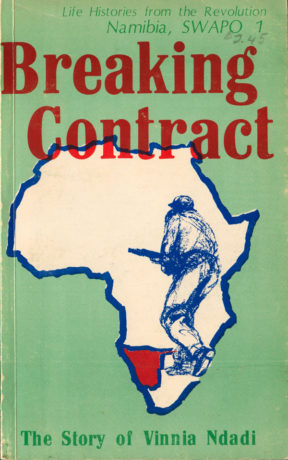 The Liberation Support Movement: The LSM was a North American solidarity organization which existed from 1968 to 1982. Marxist and anti-imperialist in orientation, they primarily sought to build support within the U.S. and Canada for African liberation movements. They built direct connections with representatives of movements from Angola, Mozambique, Namibia, South Africa, Zimbabwe, and more. With their own printshop and an ambitious political program, they published dozens of pamphlets, newsletters, posters, buttons, and even record albums featuring the stories, theories, and culture of African revolutionaries. In addition they booked tours, film screenings, and collected money for direct material aid. At a time when most political groups in N. America were either focused on the domestic sphere or Vietnam, LSM brought the struggles of people from across Africa into the consciousness of the Left. For this mini-exhibition, Josh MacPhee has interviewed three former members of the LSM, and their commentary on their work will be included, as well as over thirty objects produced by the group. Organized by Josh MacPhee. 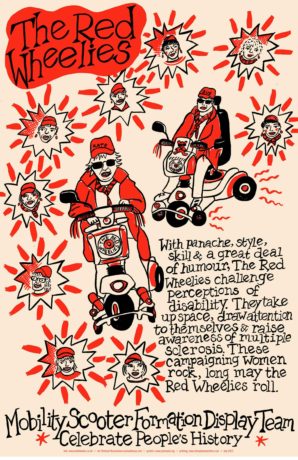 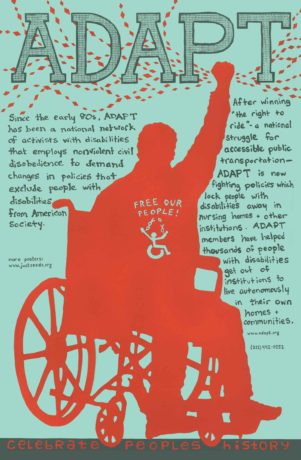 “I’ve noticed through my long life that people with vested interest in things staying the way they are regularly insist that both change and accountability are impossible”—Sarah Schulman, “Gentrification of the Mind”
Piss on Pity: Disability Activism in America looks at the history of disability activism in the United States since the 1960’s, starting with the fight for visibility and access in public spaces, deinstitutionalization, and the Independent Living Movement of the 1970’s and 80’s and the civil disobedience and direct action that led to the passing of the 1990 Americans with Disabilities Act. The exhibition explores cross-disability inclusion in the movement and how recent crip theory and queer analysis is in dialogue with disability rights. Organized by Brooke Shuman and Rob Smith. 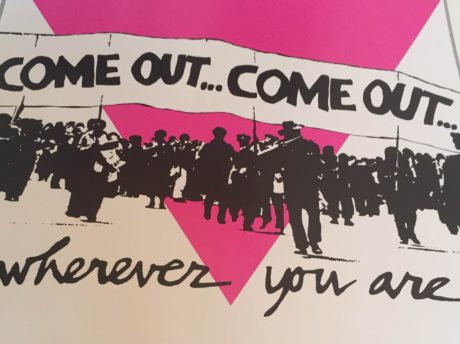 Queering Interference highlights the posters, flyers, zines and buttons in the collections at Interference Archive that were made by queers. In posters for large public demonstrations, we see the queer community calling itself into political existence, publicly asserting sexuality and gender identity, and connecting those identities to broader politics. That existence becomes the basis for a complex culture, documented here in zines, fliers, and posters for queer spaces. This culture is characterized by irony, humor, outrage, internal disagreement, and the very slipperiness of queerness: from gay pride to gay shame, “every body moves against control.” Organized by Abigail Miller and Maggie Schreiner. 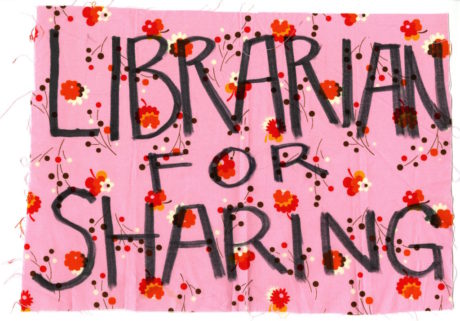 Referencing Revolution—information is power. Access to information about the world around us plays a defining role for ourselves as communities and individuals, and it gives us tools for making change. Who controls the libraries and archives that house stories about us? Who creates the rules that information workers play by? This exhibition looks at individuals and communities—libraries, archives, info shops, community centers, and information professionals (trained or self-designated)—who imagine new possibilities for distribution of knowledge. Organized by Jen Hoyer. (image: flyer from Queer Book Diorama Show 2014, produced by Hugh Ryan and Sassafras Lowrey) 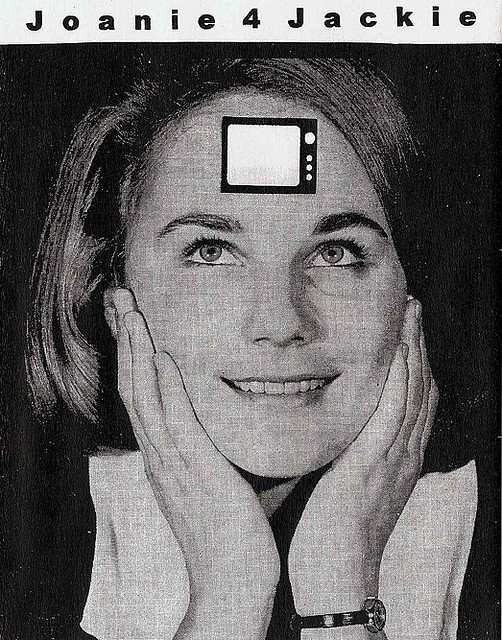 The Joanie4Jackie Chainletter—Interference Archive is presenting a special series of events revisiting the innovative video chainletter project Joanie4Jackie. Conceived by Miranda July, Joanie4Jackie was an alternative distribution system for women moviemakers. Every woman who sent her short film or video to Joanie 4 Jackie received a Chainletter tape in the mail.
“You always suspected it and now you know it’s true: Girls and women are making movies everyday” – Joanie4Jackie
Organized by Mark Lukenbill, Paris McGarry, Mary Billyou and Chris Bravo
November 4th, 7pm: A roundtable discussion with Joanie4Jackie filmmakers, archivists and organizers. To be preceded by a special screening of Pure & Magical Pussy Power, a J4J documentary, with director Vanessa Haroutunian in person. This is a special opportunity to hear first-hand accounts from the people who contributed, supported, and built the J4J project. Let’s talk about supporting culture produced by women!
November 5th, 7pm: J4J Remix Chainletter
A special opportunity to experience a Chainletter as it was originally viewed! A carefully selected group of videos, all appeared in original Chainletters, will be presented together, with authentic intros. Filmmakers in person!
Ongoing: For a limited time the J4J Chainletters will available at a special viewing station in the Interference Archive. This is a special opportunity for people to explore all 19 Chainletters, check out a curated selection of original VHS tapes, and view visual and textual material related to the project. 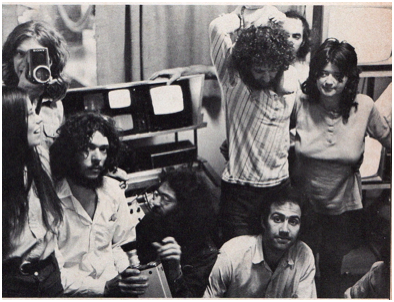 What’s That For?: An extended conversation with the Videofreex—Interference Archive, in conjunction with the Videofreex, Jon Nealon, and Jenny Raskin, are presenting a rare opportunity to engage with the seminal video collective.
October 7th, 7pm: A screening of the feature documentary, Here Come the Videofreex (dir. Jon Nealon and Jenny Raskin plus Videofreex Skip Blumberg)
Here Come the Videofreex! tells the story of the most radical video collective of the 1960’s and 70’s. It is the quirky tale of ten people’s optimism and creativity, and their vision of what television could have become at a time when the three big networks ruled the TV airwaves.
October 8th, 7pm: Videofreex Pirate TV Show—21st Century Re-edit (60 minutes, 1969-1978 & 2013) evokes the 1970s with a fast-paced variety show of 40 documentary, experimental and performance shorts and excerpts from 1,200 videotapes in the Videofreex Archive, produced by the infamous early video production group. The selection includes crowd-pleasers and important works from their nine years of production, many of which are in the Interference Archive collection. Rated R: language, drugs, nudity, violence, radical politics, alternate culture, art video.
October 9th, 12pm: Join Videofreex Skip Blumberg for an informal tour of the Interference Archive and a discussion about the ongoing effort to preserve the archive of Videofreex material at the School of the Art Institute’s Video Data Bank. This is a unique opportunity to have a discussion about preserving early video works, and the challenges of ensuring access to these videos to future culture workers and activists.
links:
The Documentary
https://Videofreex.com/