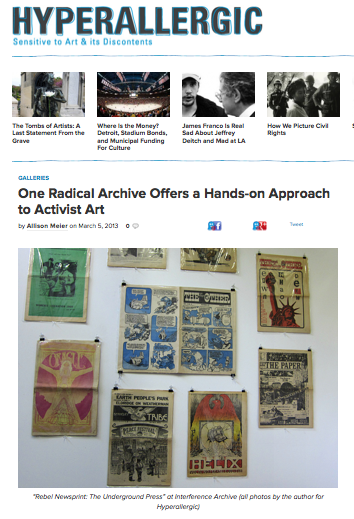 “Rebel Newsprint: The Underground Press” at Interference Archive (all photos by the author for Hyperallergic)
The intensified activism of the 1960s fueled by the Vietnam War and struggles over class inequality, women’s rights, and black liberation drove the rapid growth of the underground press. Between 1965 and 1969, the five indie counterculture newspapers scattered across the United States multiplied to over 500 around the country, representing and communicating the voices of feminists, the Black Panther Party, gay activists, psychedelic aficionados, and other social movement groups with their art and design as radical as their messages. Rebel Newsprint: The Underground Press at Interference Archive in Gowanus is digging into this historic period with over 100 newspapers from across the sixties underground.

“Rebel Newsprint” at Interference Archive
The exhibition of ephemera is curated by Sean Stewart, the editor of On the Ground: An Illustrated Anecdotal History of the Sixties Underground Press in the U.S. (2011), and was drawn from his own collection, with yellowed and folded issues of newspapers like the bilingual community publication Basta Ya started in San Francisco in 1969, the experimental San Francisco Oracle published from 1966 to 1968 out of Haight-Ashbury that reflected the area’s psychedelic scene in trippy rainbow ink and spiritual poetry, and the sexual revolution sourced Screw: The Sex Review co-founded by pornographer Al Goldstein. Most of the newspapers are held in plastic and suspended from the walls of the Interference Archive’s small space, a cascade of counterculture messages like “End the War Now,” “Don’t Mourn, Organize,” and “All Power to the People” blaring out from vibrantly hued cover art and rapid fire text.
One issue of the East Village Other, responding to the 1967 storming of hippies convening in Tompkins Square by police has an image of a man with a bloodied face, his hands handcuffed and stretching down while text frames him on two sides: ”My God! My God! Where is this happening? This is America!” (You can see this and some other covers in detail on the Interference Archive blog.)

Newspapers in “Rebel Newsprint: The Underground Press”
The importance of a visually engaging communication device was especially essential for movements that were located outside of the radical coastal centers, like Space City! in Houston. Thorne Dreyer, part of its editorial collective, is quoted in the exhibition text: “Houston was all spread out, you know, there were antiwar people and there were rock ‘n’ rollers but there wasn’t anything to pull them together. Space City! created a place where all these people could come together.” There was also the relaying of information between distant parts of the world where activism was broiling. Alice Embree, a staff member at Rag, is quoted: “The importance of Rag and the underground press movement was that it was the connective tissue; it spread the news of what was happening from here to other places. It brought the news of, say, People’s Park or whatever was going on in Berkeley or New York, back.” This extended to movements in Mexico and even across the ocean in Japan and France.

“The Art of Cultural Correspondance” publication in the Interference Archive
Opened in December of 2011, the Interference Archive is run by a volunteer collective with Kevin Caplicki, Molly Fair, Josh MacPhee, Cindy Milstein, and Blithe Riley at its core. Their small library in Gowanus is packed with materials from around five decades of social movements, with a significant portion of the archives related to activism outside the United States. As a public resource, anyone can stop by during their open hours and dig through boxes of zines, comics, protest banners, books, and some audio and video material. There are also buttons and t-shirts and flat files of prints from Just Seeds, an art cooperative for graphic designers started by Interference Archive founder MacPhee. Much of the Archive is sourced from the personal collections of MacPhee and fellow founder the late Dara Greenwald, which was amassed from their own participation in social movements and the punk rock culture of the 1980s and 90s.

“Rebel Newsprint: The Underground Press” installation view
Every drawer and box and shelf of the Interference Archive is overflowing with valuable research on social movements, from the Paris Rebellion of 1968 to the Latin American solidarity organizations to materials on apartheid, with the importance of art as an avenue for a message’s resonance appearing throughout the decades and the physical connection with the relics of movements really bringing them to life. While access to all of this is their main goal, their regular exhibitions are a way to examine the role of visual messages in these materials. Looking at the walls covered in the underground newspapers can be a bit overwhelming, but is worth spending time with for the innovative takes on design and use of visuals to convey their fervent messages that were unrepresented in the mainstream press.