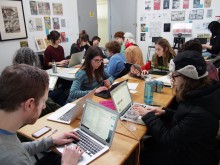 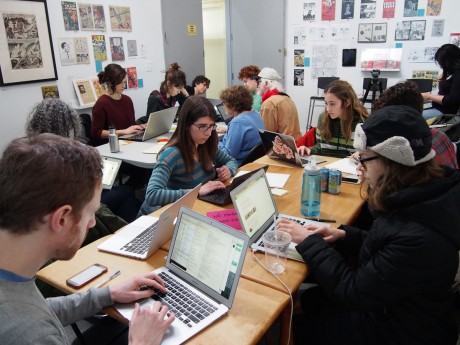 The Interference Archive, a volunteer-run institution dedicated to gathering “the cultural ephemera of social movements,” sits across the street from a trendy pie shop and around the corner from the Morbid Anatomy Museum, in the spartan, brick-heavy confines of Gowanus, Brooklyn. Last weekend, while the museum hosted a flea market, its venders hawking “artful bones,” a group of twenty or so descended on the archive for a Wikipedia edit-a-thon, themed around art and feminism—one of a series of such events unfolding throughout the city. They gathered in a space adjacent to the main archive, a small room whose walls were covered with a colorful exhibit on alternative comics. Throughout the event, members of the co-working space next door darted through awkwardly.

The edit-a-thon began with a restatement of the day’s main objective: to combat Wikipedia’s well-documented gender gap by improving, however incrementally, its coverage of women in the arts. In spite of the site’s ostensibly egalitarian, accessible format, more than ninety per cent of its editors are male, according to a study conducted in 2011 by the Wikimedia Foundation. Less than five per cent of its super-users—people with more than five hundred edits to their names—are women. Many causes have been suggested for this, from Wikipedia’s code-heavy editing interface to its contentious and sometimes hostile user culture. What results, however, is an indisputable failure to consider certain topics that are of particular interest to women. (Note that the entry for the Teenage Mutant Ninja Turtles, a fictional team of martial-artist reptiles, is twice the length of the entry for Toni Morrison, a real-life Nobel Prize-winning author.)

At the archive, Jim Henderson, a white-bearded man in enormous glasses and a beige “WIKIPEDIA EDITOR” baseball cap, flagged down the participants as they entered and asked whether they had a Wikipedia account. For the many who did not, he proffered his wheezing Dell laptop and a primer on user names. (“I’m an old man, so I use my full name, but most people don’t,” he said.) Henderson’s specialties as an editor are categorization—making sure that entries are sorted properly—and providing the longitude and latitude of geographic locations. He edits Wikipedia, he said, for “at least two hours a day.” Once everyone was settled, Ryan McGrady, an employee of the Wiki Education Foundation, asked who in the audience was new to editing. Half the hands in the room went up. He then launched into a brief PowerPoint presentation on Wikipedian jargon, including the idea of “notability,” which demands that a topic have “received significant coverage in reliable sources that are independent of the subject.” (A note on McGrady’s slide asked, “What if notability guidelines reproduce structural sexism and racism?”)

As the lecture ended, the room filled with the ambient noise of laptop fans and the crunch of banana chips. Manmeet Sanhi, a twenty-eight-year-old freelance journalist, was editing the entry for Phoolan Devi, an Indian folk hero nicknamed the Bandit Queen, who was famous for her life of crime and subsequent election to India’s Parliament. “The page is full of things that are irrelevant to her history,” Sanhi said. “Who she was married to, when she married—it’s not relevant. Articles about minorities need precision, attention.” (At the top of the page, a cautionary note read, “This documentation needs attention from an expert in Women’s History.”) Brooke Shuman, who was sitting nearby, noted that this was only her second time editing Wikipedia. Previously, she had tinkered with the entry on John Candy. Beside her, Taylor Hynes, a project manager at an ad agency, was creating a page for Pilot TV, a queer feminist pop-up TV studio that formed in Chicago in 2004.

Down a slate-gray hallway, the founders of Art+Feminism, the organization behind the edit-a-thon, had taken over the main archive room. Surrounded by the paraphernalia of social movements past and present—posters and T-shirts, stickers and banners—they were tabulating the results of dozens of events during the month of March. The group has been organizing edit-a-thons since 2014, and in 2016 alone there have been about a hundred and forty events across the globe, inspiring so many edits and expansions that the team told me it would take days to precisely calculate the numbers. “We have events on every inhabited continent,” Jacqueline Mabey, one of Art+Feminism’s three founders, said. “Get with it, Antarctica.” Other organizations have promoted other demographics—medieval women, Jewish women, women in science, women in jazz. When I pressed Mabey and her colleagues on how effective edit-a-thons are in correcting Wikipedia’s omissions, Michael Mandiberg, another founder, pushed his wire-rimmed spectacles high on the bridge of his nose. “We really resent the outcomes-focussed, neoliberal drive in all things,” he said. “How do you quantify community? How do you quantify the empowerment of intersectional feminists?”

Next door, the archive’s librarians had provided materials on artists and art projects that they hoped to create Wikipedia pages for. There were manila folders full of yellowed newspaper clippings and photos of protests and art installations. Beside them, a table was strewn with books like “The Female Gaze” and “Feminism and Theatre.” Maura Smale, the chief librarian at the New York City College of Technology, held a sheaf of postcards adorned with supine nudes. She was assembling, reference by painstaking reference, an article about Arlene TextaQueen, “Australia’s felt-tip super-heroine.” Beside Smale, one of her students at the CUNY Graduate Center was expanding an article on the Greenham Women’s Peace Camp, a live-in women’s protest against nuclear proliferation in Britain.

One table over, Corinne Vizzacchero and Andrew Sloat, friends in their late thirties, were collaborating on an article about the Madame Binh Graphics Collective, the all-women propaganda arm of a Communist organization that was founded by members of the Weather Underground. “It’s amazing that we—two feminist graphic designers—are just learning about this for the first time,” Sloat said. Vizzacchero, whose black curls brushed her Beyoncé-inspired “FLAWLESS” sweatshirt, told me that she couldn’t imagine herself sitting alone at home editing Wikipedia. “But here, it’s addictive,” she said.