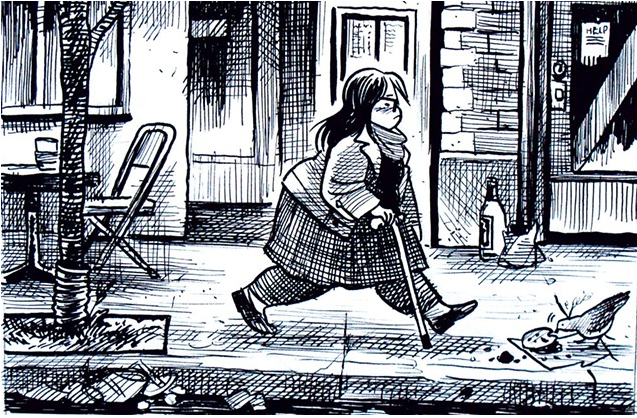 Above: Laura Park’s self portrait
The Center for Cartoon Studies is an unlikely haven in White River Junction for people dedicated to creating unique worlds using a deceptively simple form: comics. A current exhibit at Studio Place Arts in Barre invites visitors to get acquainted with the school and celebrate its 10th anniversary. It’s titled simply “From the Center for Cartoon Studies Archive.”
“What if comics aren’t simply a quaint feature of ‘geek culture’ but the way the world processes information?” ask Marek Bennett and CCS cofounder James Sturm in their “Applied Cartooning Manifesto” (itself a comic book). The show offers ways of understanding that question — as does a concurrent comic-focused exhibit in Brooklyn cosponsored by the Vermont cartoon school.
A brochure from CCS, on hand at the SPA show, poses the question: “What small detail suggests a universe that is bursting at the seams?” The samples from the school’s archive, old and new, offer answers.
“This is the type of exhibit that’s all about sharing process,” says SPA executive director Sue Higby. The no-frills show features 20-odd comic strip drawings, each sealed between sheets of clear, protective laminate. Visitors can also flip through a selection of books from the cartoon school’s Schultz Library — named for “Peanuts” creator Charles Schultz, a tribute that emphasizes the legacy of comics in pop culture.
Because of that legacy, we may become familiar with comic characters almost by osmosis. We grasp the polarization of rivals Betty and Veronica in the “Archie” comics, for example, through a long-term process involving Sunday-morning newspapers, inherited or purchased comic books, Bazooka bubblegum wrappers and the like. The ubiquity of comics makes it easy to forget that somebody, somewhere, drew all of them.
For those accustomed to discovering comics in this casual way, reading a comic strip on a gallery wall is unusual and counterintuitive, and the originals are often surprisingly larger than what reaches the masses. At the SPA exhibit, the hand of the artist is often evident in the selections curated by CCS cofounder Michelle Ollie from the school’s archives — a collection that numbers some 5,000 works.
A “Beetle Bailey” strip from September 2012 shows evidence of Wite-Out, and the cartoonist’s web address has been pasted in. A peripheral field of pen scratches is par for the course on many of these samples. A “Dick Tracy” strip even has a clue-like fingerprint on a lower panel. 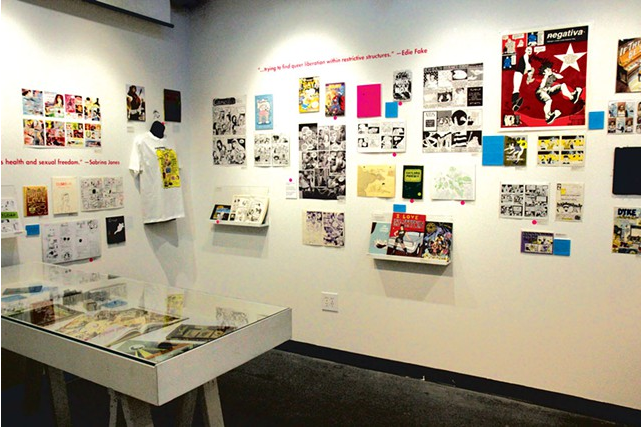 Above: Interference Archive
The uninitiated may be hard-pressed to situate the works on view within a larger dialogue about cartooning as a discipline. At first, the hanging seems chronological, with older strips skewing to one side of the gallery. But it’s not. Ollie told Seven Days by phone that the comics she selected are a “survey of the collection.” They range from early heavy hitters such as Mort Walker (“Beetle Bailey”) and Will Eisner (“A Contract With God”), who coined the term “graphic novel,” to recent work by celebrated CCS alumni such as Colleen Frakes (Prison Island) and Sophie Goldstein (The Oven).
Ollie emphasized that the primary role of the archive is to serve as a teaching tool for students. “There’s visually a learning opportunity when you look at different approaches,” she said.
One thing the exhibit makes clear is that cartooning is an art form with a peculiar relationship to time and consumption. Cartoonists’ invented worlds are anything but static. An exhibition label explains that Ernie Bushmiller changed the name of his comic strip “Fritzi Ritz” to “Nancy” in 1938, five years after the original titular character’s niece, Nancy, was introduced and began to dominate the storylines.
While the goal of cartooning is to tell a story quickly and effectively, production is labor-intensive and frequently involves multiple artists. This presents a specific set of problems for cartoonists trying to sustain a living.
The dialogue between cartooning and time takes center stage in “July Diary,” on view at SPA, in which contemporary cartoonist and CCS alumna Gabrielle Bell visually rendered her daily experiences for a month. She then sold the originals to support herself. The panels offer confessions such as “To tell you the truth, I would not be able to enjoy this life without regular texting with Steve” — a far cry from the stereotype of comics as a sci-fi/fantasy geekdom inhabited primarily by boys and young men.
The intersections of personal narrative, identity politics and the radical social potential of comics are at the crux of the current show at Brooklyn’s Interference Archive: “Our Comics, Ourselves: Identity, Expression and Representation in Comic Art.” Cosponsored by CCS, the collaboratively curated show features comics addressing topics including “feminism, abortion, racism, cultural identity, social activism, labor unions, veterans of war, sexual abuse, student debt, immigration, public health, civil rights, gender and sexual identity and a lot more,” according to Interference Archive’s website.
“Our Comics, Ourselves” co-curator Monica McKelvey Johnson reached out to CCS in September 2015. The show, which runs through April 17, includes in its massive 100-plus roster a number of artists who are CCS graduates or fellows — Annie Murphy and Sophie Yanow among them.
Renowned Vermont cartoonist Alison Bechdel appears both in the Brooklyn show and at SPA — where visitors will see an original page drawing from her 2006 graphic memoir Fun Home: A Family Tragicomic. (The memoir was made into a musical, which won five Tony Awards last year.)
“Comics are a pretty powerful mediator of empathy,” Johnson told Seven Days by phone. For her, “Our Comics, Ourselves” is a timely exhibition. “We’re no longer at the point where people have to justify that comics or graphic novels are a legitimate form of literacy,” she said. “Now that we consider this a viable medium for broad, potentially mass communications, let’s look at the nuance of how we’re telling these stories.”
Johnson’s comments sound a lot like the “Applied Cartooning Manifesto”‘s assertion: “We’ve spent 30,000 years developing the cartooning skill set. Now is the time to apply it!”
Said Ollie, “I feel like we’ve only scratched the surface of the things that we can do.”
It seems that comic art is still a brave new world for artists, fans and the general public alike. Luckily, there’s a school for that.
Disclosure: Seven Days features artwork by students at the Center for Cartoon Studies each month.