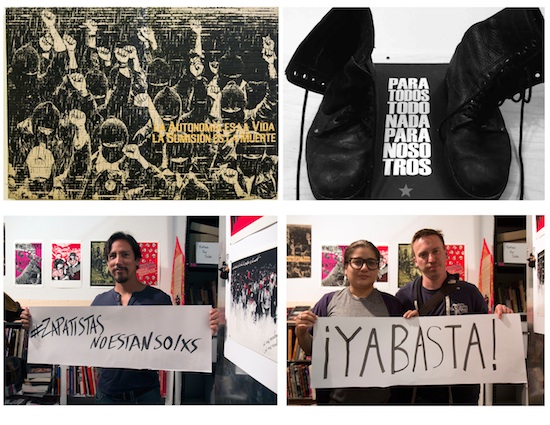 Dear Friends and Supporters,
As we approach our three-year anniversary this December, we wanted to share some of the major accomplishments of 2014, and to let you know what’s on the horizon. The rate at which we’ve grown continues to astonish and inspire us, and we’re hoping that you will support our efforts with a monetary donation this fall.

First, did you know we’ve physically expanded? In fall 2013 we moved our exhibition space into a second room in our building. Through the past year, this extra space has allowed us to take more of our collection out of our boxes for easy access, while continuing to host public events and an ongoing exhibition series that provides ways for the community to interact with radical histories. 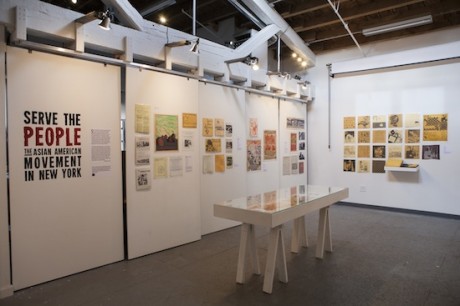 “Serve the People: the Asian American Movement in New York” was open in our exhibition space from December 2013 through 2014.
Second, we have so many new materials in our collection! While we’ve been consistently acquiring new donations since we opened, received a surge of new movement culture since the 2013 article on Interference Archive in the Times.
Highlights from recent acquisitions were profiled in the 2014 exhibition, We Are Who We Archive, including donations from the poster collection of Alexis de Veaux, radical 1970s newspapers from the Bleecker Street Yippie House, and other great material from around the world including Greece, Spain, and Latin America.

“We Are Who We Archive” served as a portrait of a growing archive and highlighted the role of individuals in preserving collective history.
Third, we’ve been organizing ourselves! Running an archive on all volunteer labor is no small task, and we’re constantly searching for better ways to organize ourselves in a way that reflects the communities whose radical histories we represent. While we still have a lot to figure out, we are happy to report that there are more people regularly volunteering than ever before, working on projects such as building our library catalog, processing new acquisitions, organizing educational events, sorting posters, and building bookshelves.
If you would like to add your energy to our amazing volunteer labor force, please send an email to iavolunteers[at]riseup.net.
Fourth, we’ve organized and hosted four incredible exhibitions and over thirty-five inspiring events in 2014 alone! 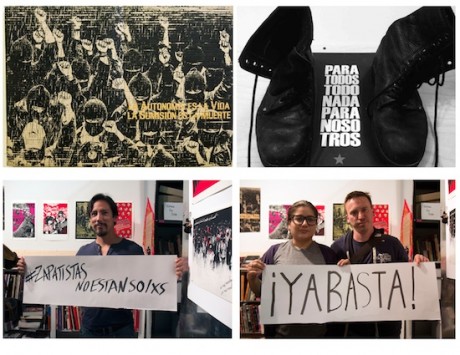 Through an exhibition and event series, “La Autonomia es la Vida, la Sumisión es la Muerte” celebrated 20 Years of the Zapatistas and the Autonomous Communities of Mexico.
Fifth, we’ve hosted classes from all over New York City and beyond. These groups range from middle school students to academics getting their doctorates. We’ve had great conversations with classes from the New School, SUNY Purchase, Queen’s College, Pratt, St. Francis College, Mobile Print Power, and many more. 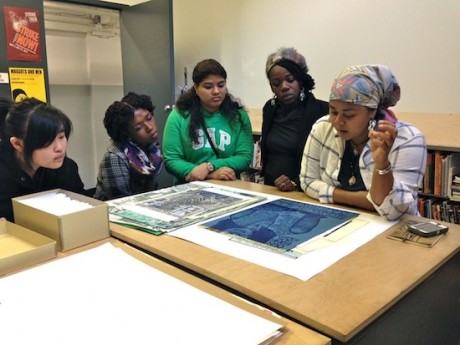 Students from the Groundswell Mural Project visit Interference Archive to do research on visual representation of social issues.
Finally, we’re showing histories in a way they have never been seen before. We’ve just wrapped up “Self-Determination Inside/Out”, an exhibition and public program series featuring the cultural materials produced by incarcerated people and their allies. We’re looking forward to the opening of “Documents from the Greenham Common Women’s Peace Camp” on December 5, 2014. Greenham Common Women’s Peace Camp was a 19-year anti-nuclear protest and encampment; this exhibition and event series looks at a diverse group of women at Greenham over a nine year period. For more information, visit our website.
All of this is to say that we are working hard at making Interference Archive a social movement archive like none other. But we quite literally could not do this without your generous donations of time and labor. Running an archive from below costs money.
In 2014 we received two small grants from the Brooklyn Arts Council and the AJ Muste Memorial Institute to expand on our public programming Alongside this, we have committed to maintaining a base of operational funding from sustainers; we currently receive sustainer support from approximately 130 individuals who give $10 to $25 per month. This financial model keeps us accountable to the community that believes in archiving from below, and it allows us to maintain an independent archive of social movement culture and facilitate an ongoing schedule of programming.
We would love your support as we move forward in 2015 with more programming and more archiving. Please consider helping today by making a one-time donation , or by signing up for recurring donations as a sustainer of Interference Archive.

From all of us at Interference Archive: thank you. You make archiving social movement history possible.

Next Post: [POSTPONED] No More: Challenging State Violence From Mexico to NYC >