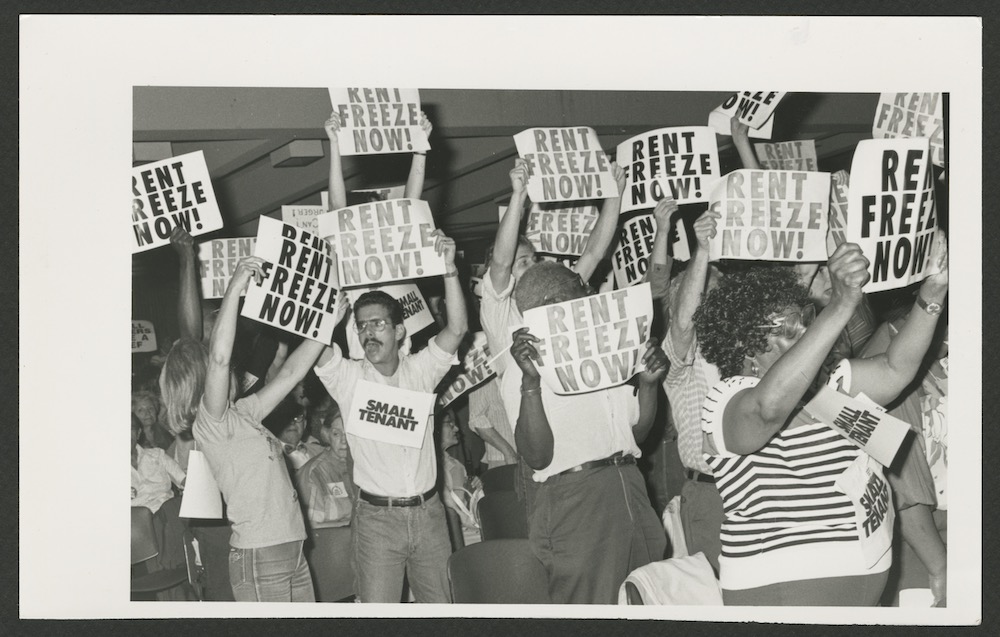 New York City is a city of tenants; close to seventy percent of the city’s residents occupy over two million apartments. Rent regulation, including rent control and rent stabilization, covers over a million of these units. That number is dropping daily, due to the gradual weakening of the rent regulation system; predatory equity, which favors the acquisition of capital over the housing rights of long-term residents; and the daily actions of abusive landlords who harass and evict tenants. However, for the past century, New Yorkers have continuously organized to claim the right to live in a city that is integrated and affordable.

This exhibition was developed in collaboration with:

Urban renewal, made possible by Title I of the 1949 Federal Housing Act, involved the widespread demolition of working-class neighborhoods in favor of middle-class housing developments. By 1959, sixteen massive projects had displaced over 100,000 people, who were disproportionately people of color. Across New York City, urban renewal projects led to mass relocations and increased residential segregation.

On December 4, 1952, over 1,500 families in East Tremont were served eviction notices in advance of the construction of a one-mile segment of the Cross-Bronx Expressway. Although the construction of the Cross-Bronx Expressway was not funded through the Title I program, it involved many of the same features. Residents of the densely populated and tight-knit neighborhood formed the Crotona Park Tenants Committee to fight the highway plan. The committee testified and lobbied elected officials, as well as conducting a feasibility study of an alternate route. Planning czar Robert Moses intimidated local officials into supporting his plan, which ultimately caused the displacement of over 5000 people.

In the midst of WWII, the City of New York and the MetLife Insurance Company announced an urban redevelopment project for returning veterans. The publicly subsidized, private, and for-profit development would have a whites-only policy. When the project opened, new residents formed the Town and Village Tenants Committee to End Discrimination in Stuyvesant Town and began to sublet to African-American families. Public pressure and outrage led to the passage of the Brown-Isaacs law, which banned discrimination in publicly subsidized private housing. After attempting to evict the leaders of the tenants’ committee, MetLife began reluctantly to comply with the new legislation.

In the mid-20th century, structural discriminations, such as urban renewal and redlining, intensified long-standing housing segregation throughout NYC. By the 1960s, outright discrimination in housing was legally prohibited, so homeowners and realtors would quietly discriminate by telling black apartment searchers that the advertised apartments were no longer available. The Brooklyn chapter of the Congress of Racial Equality (CORE) conducted direct actions to combat these practices. When black applicants were denied apartments, Brooklyn CORE would send white “testers” to apply for the same apartment, and would document the pattern of discrimination. CORE members would then threaten to report the realtors to government agencies, or hold pickets, sit-ins, and sleep-ins to publicize the discrimination.

A rent strike is a tactic in which a group of tenants come together and collectively agree to refuse to pay their rent until the landlord meets a specific list of demands. In the 1960s, rent strikes were often adopted as a tactic in response to widespread landlord negligence due to low vacancy rates caused by urban renewal and segregation.

In 1963, Harlem tenants initiated a large rent strike as the culmination of more than a decade of organizing efforts by the Community Council on Housing and activist Jesse Gray. When tenants appeared in housing court, they presented the judge with dead rats to dramatize their living conditions. The judge legalized the rent strike, allowing tenants to pay money to the courts instead of their negligent landlords. However, the poor conditions in the apartments were rarely ameliorated.

National civil rights actions during 1963 and 1964 transformed the Harlem rent strike into a larger social movement, and the tactic quickly spread across the city. Brooklyn CORE formed a Rent Strike Committee in August 1963 and led four buildings in Bedford-Stuyvesant and one in Brownsville in a rent strike campaign. Organizers and tenants picketed landlords’ homes, petitioned city agencies, and conducted tenant education sessions.

“The major aim of the rent strike committee is to teach people to fight for themselves. On the specific problem of living conditions and, in the future, on civil rights problems concerning the human condition, we expect each building organized by CORE to serve as a fighting unit. The people will never again become victims if they themselves lead the fight.”

In 1943 the federal government imposed a NYC rent freeze through the wartime Office of Price Administration. After the end of WWII, tenant organizers fought successfully to have these federal controls replaced with New York State rent control, and eventually New York City rent control. In 1969, a weaker regulatory system called rent stabilization was enacted. The Rent Guidelines Board was created to determine annual rent increases for rent-stabilized apartments.

Neoliberalism and the Dismantling of Rent Control

New York City during the 1970s was overshadowed by recession and conservative backlash. At the beginning of the decade, the real estate and landlord lobby, paired with the neoliberal policies of Governor Nelson Rockefeller, attempted to destroy the rent control system. A package of six “decontrol” bills moved rent regulation from municipal to state jurisdiction, and introduced “vacancy decontrol,” which withdrew apartments from the rent regulation system whenever they were vacated. These laws rapidly resulted in a huge increase in evictions.

Tenants responded to these major setbacks with extensive organizing. In 1974 the Emergency Tenant Protection Act (ETPA) was passed, which extended rent stabilization to most of the older apartments that had been affected by vacancy decontrol.

When landlords anticipate redevelopment or luxury renovations that will increase rental values, they often hold apartments intentionally vacant, a process known as “warehousing”. During the summer of 1970, a squatter movement installed over 300 families in warehoused apartments across the city. Most of these squatted apartments, frequently slated for demolition in urban renewal areas, were owned by the city or by large institutions. Led by African-American and Latino families, the squatter movement gained significant media coverage, giving exposure to critical housing issues such as urban renewal, property speculation, long-term vacancies, and the shortage of affordable housing.

In December 1970, the Black Panthers, the Young Lords, I Wor Kuen, the Movement for Puerto Rican Independence, and the Metropolitan Council on Housing organized a mock trial called the People’s Court Housing Crimes Trial. Tenants, squatters, and sympathetic city officials testified about the poor housing available to low-income residents. The event successfully brought together a multiracial, intergenerational group of people working on housing issues in New York City, as well as uniting liberal and radical organizers.

As the city rebounded from the 1970s financial crisis, new threats to tenants emerged during the 1980s. Co-op conversion allowed landlords to convert their rental apartments into market-rate cooperatives or condominiums. The regulations for co-op conversion allowed vacant apartments to be sold at higher costs, increasing the incentive for landlords to warehouse vacant apartments in preparation for conversion. By the late 1980s, a New York State survey estimated that between 40,000 and 100,000 apartments were being warehoused annually.

Dykes Against Racism Everywhere (DARE) was a multiracial direct action group based in the Lower East Side. A radical lesbian organization, DARE’s working groups constructed a complex political agenda centering anti-racism while creating connections to other struggles. A DARE flyer explained the relationship between policing and gentrification.

“We feel that the housing struggle is crucial in the fight against racist and economic oppression… For lesbians and gay males generally, and for Third World people in particular, the increased police harassment that accompanies gentrification makes it more and more difficult just to walk down the street without being assaulted by the cops.”

In 1981, the AIDS epidemic began in NYC, and over the course of the following decade almost 20,000 New Yorkers died. During the 1980s, people with AIDS had few legal protections, and the death of a leaseholder resulted in the eviction of the surviving tenant. The tenant movement rallied to save the homes of survivors. In 1989, following protests and press coverage, nontraditional family members gained the right to remain in their homes when the tenant of record dies.

New York State’s rent regulation laws expire after a set period of time, and therefore require periodic renewal. In the 1990s and early 2000s, the real estate and landlord lobby successfully weakened the rent regulation laws during renewal periods. The 1993 renewal introduced Temporary High Rent Vacancy Deregulation (which deregulated apartments renting for over $2,000 per month) and Temporary High Income Rent Deregulation (which deregulated apartments for tenants with household incomes over $250,000). The 1997 renewal introduced 20% rent increases on all vacant apartments, and placed new limitations on the power of housing court. In 2003, preferential rents were introduced, allowing landlords to offer rents below the legal maximum in exchange for latitude to impose steep hikes upon renewal. Overall, these changes to the rent regulation system have resulted in the deregulation of tens of thousands of units of housing. In 2019, tenants successfully reversed the rollback and won many new protections: rent regulation was made permanent (eliminating periodic renewals), apartments are no longer deregulated when they meet a certain rent threshold, and the 20% vacancy bonus was eliminated, preferential rents became permanent for current tenants, and major changes were made to Major Capital Improvements (MCI) rent increases, and to increases for rent controlled tenants.